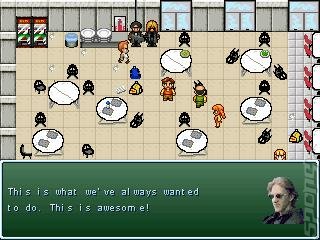 Three finalists have now removed their games from Slamdance in support of the controversial Super Columbine Massacre RPG.

Following the SCMRPG's removal from Slamdance last week there's been a backlash from indie game developers.

Thatgamecompany, developer of flOw, summed up the prevailing sentiment on their blog when they stated:

'We cannot help but wonder, if SCMRPG were a film, if the reaction by the Slamdance organizers would have been the same. Removing it from the festival is discouraging, because it implies that games are still not to be taken seriously, that games are only for mindless fun. If we are trying to work against this stigma as artists, then we also have to fight against this stigma as entrants in the festival as well.'

In spite of this, many critics of the game's removal have expressed their understanding of the decision. Jon Blow, creator of Braid, stated:

This may seem paradoxical, but I do respect the sponsors' decision to pressure Slamdance into dropping the Columbine game. They are just preventing their money from supporting something they consider morally reprehensible. So, good for them.

What seems to have been largely over-looked, however, are comments from Slamdance President Peter Baxter. He has stated that the removal of the controversial Columbine game from Slamdance was in fact a personal decision. The game's creator, Danny Ledonne, was previously advised that its removal was due to pressure from financial backers. Rocky Mountain News reports Baxter as stating:

"On the one hand a jury selected this game, and as a result of that decision it leads to our organization supporting their creative decision. On the other hand there are moral obligations to consider here with this particular game in addition to the impact it could have on the Slamdance organization and its community. Ultimately it was my decision to pull this game and I hope that a choice like it will never have to be made again."

In other words, Baxter seems to be stating that he is worried about what could happen, not existing pressure.

Sam Roberts, director of Slamdance's games competition, has said that he does not agree with the decision:

"I believe this festival's mission is to give the artists a place to express themselves. This is a decision I disagree strongly with. I think it will hurt the competition. This is not what we are supposed to be doing, this is the very opposite of it."

The full ramifications of this decision for the festival remain to be seen. At this stage, however developers' faith in Slamdance seems heavily compromised. Would this game have been pulled for its content were it a film? Let us know what you think in the Forum.

My real question is...is this game any good? I mean anybody could create some kind of piece of crap flash app that only displayed pictures of jews being killed in holocaust camps and submit it simply to get attention, that does not mean that its a good game...or should even be considered a game.

The game seems to actually employ a great concept, seems to be a large game, and actually seems to be completely thought out. I have not played it (nor for any moral reasons, i just dont have time to play games even on my wii or 360). If its a good game it should stand on its own despite its content and should be allowed a fair chance to compete.

Worried about what 'might' happen. It's all about the money isn't it?

Sponsers pull out? Then re-group and get some new ones - or is that too much effort?