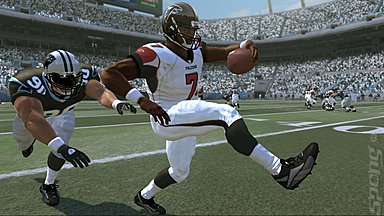 Mahoney Jr explained that having slotted it in to his Xbox (the game!) he saw a warning: "WARNING: What follows should not be distributed to minors." However, rather than immediately switching it off and telling his parents, Kolton looked on.

What followed is being reported as some ?explicit? images. SPOnG assumes these to be explicitly of ladies and gentlemen doing something other than getting into a huddle before handing-off, making a fumble and finally throwing a Hail Mary to a tight-end.

Young Kolton commented, "Right when I saw it, I figured something was wrong. I knew it was bad. This is definitely not Madden." Yes, Kolton, but what about the warning?

SPOnG is certain that ?mom? Linda was not simply upset by the timing, despite commenting, "I'm very disappointed he had to see that, on Christmas day especially.? She continued, ?I mean, no kid should have to see that.?

Uncle Dan Mahoney bought the game which, he says "?was a brand new game. It was entirely wrapped with those security seals on them?, at Circuit City in Modesto (California) on December 2nd.

Kolton?s dad, Tim, explained that his brother, Uncle Dan is trying to get to the bottom of all of this, but it?s hard? "It's hard for him to go to the store without the facts that we have. And it's hard for us just to use the phone and email systems to get in touch with whoever is responsible.?

As yet Electronic Arts is yet to comment on how such filth made its way into a game that is supposed to concern the management of huge, drug-cheating athletic dudes as they smash their helmets into each other repeatedly.

So, the question is did Electronic Arts or Circuit City or the delivery firm have one of those Xmas parties in which someone inevitably goes a little bit too far? Was one rouge copy produced in a frenzy of pre-Xmas festive fun? Or, are there more copies of Maiden NFL '07 (Surely, that?s Madden) out there waiting to be picked up like Willy Wonka?s golden tickets ? but in a bad way, of course?

SPOnG can?t wait to see what Jack Thompson does about this one.