And PS3 too? when it gets here? in March 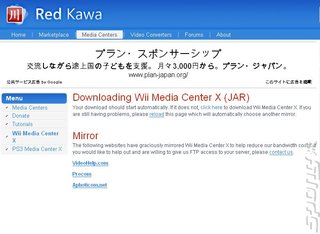 Want a ?multimedia? centre? Of course you do. But you?ve spent your cash on your Wii already. Stop whinging and check out the video below.

The Wii in combination with its Opera browser, Wii Internet channel, a plug-in from Orb.com and an Internet-connected PC can now, apparently, enable you to stream (well, most) of your multimedia goodness.

And if that wasn?t enough, then two more pieces of software have also gone into early stages of code to enable both the PS3 (we?re still waaaaiting!) and Wii to stream content.

According to the developer, Canadian-based Red Kawa, the two downloads: Wii Media Center X and PS3 Media Center X are, ?a free multimedia server(s)?. They enable you to stream certain types of pictures, music, videos and files from your PC to both platforms respectively. Both programs run on most ?popular? operating systems including Windows, Mac OS X and Linux.

Here are the major features according the Red Kawa:

Videos
Stream and watch videos in the Flash video format (FLV) on your Wii or PS3.

Music
Playback MP3s on your PS3, and on a Wii without the need of an SD card.

Pictures
View pictures on your PS3, and on your Wii without the need of an SD card.

Files
Browse your files located on your server.

SPOnG has yet to test either solution, but will be doing so in the near future.