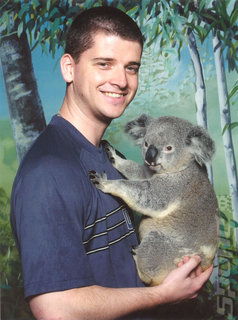 Mikey Foley, Koei - plus a small Koala!
All Images (4) »
SPOnG is quite often mistrustful and critical of marketing executives in the videogame business. The main reason for this is quite simple ? many of them don?t actually play games or have much interest in the ?product? they are hawking, beyond identifying a target demographic and attempting to, well, hit it.

Thankfully though, there is a healthy minority of marketing people who are just as passionate and knowledgeable about gaming as we are. So they are the ones we?ve got to share with us their thoughts about gaming in 2006 and their hopes for 2007.

Firstly, we have value specialist Xplosiv Software?s marketing manager, Paul Benjamin. Benj?s impressive knowledge of gaming and of the industry means that any meeting or social event with him is always a pleasure, or maybe that?s all we remember.

Second up, we have Koei?s marketing and sales supremos, disappointed football fan Mikey Foley and hip hop aficionado Will Curley, keepin? it real and close to the street. Or something.

Next up, Koch Media?s marketing and PR fellas, Jon Bailey and Stefano Petrullo. The usually placid Mr Bailey is, SPOnG can warn you from first-hand experience, deadly when armed with a massive rubber broadsword. He can also claim the dubious honour of having spent more time in Dark Age of Camelot than pretty much anyone else on the planet. Jon has no interest in football and his beach soccer skills leave a lot to be desired.

Finally, we have a lady. Barrington Harvey?s fun-loving Laura West looks after the PR for ELSPA and is our first port of call whenever we need anything from that august institution. As well as being alarmingly good (and highly competitive) at most games, Laura is also as hard as nails and can drink us under any table, so we?ll say nothing untoward about her, nor will we mention that incident at the BAFTAs last year? (Laura, please send cash to the usual address)

SPOnG: What are your (gaming and non-gaming) highlights from 2006?

SPOnG: Gaming and non-gaming lowlights from 2006?

SPOnG: Things you're either looking forward to in 2007 or would like to see?

SPOnG: What two gifts were you hoping to see in your Xmas stocking this week?

SPOnG: What were you doing at 4pm on Xmas day this year?