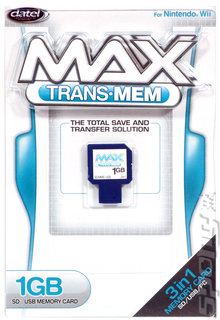 All Images (2) »
Poor? Don?t have a Wi-Fi network at home? Want to play US Wii games NOW instead of waiting for months until we unlucky Europeans get to play them (damn all those pesky language-barriers which can only mean PAL delays!). If this is you, then read on, as SPOnG is about to shower you with golden Wii news.

SPOnG has just been speaking to our friends at Datel, who have sent us details on a couple of 'cheap as chips' must-have Wii gizmos. They have also informed us that region-unlocking software for Wii ? to enable you to play US Wii titles (providing you have an NTSC-compatible TV of course) is being developed and should be arriving ?very soon.? Make it come faster, Datel!

Back to the Wii peripherals. The first clever little bit of plastic is this 1GB ?Trans?Mem? card (pictured here) which provides you with 1GB of data storage for game saves, music, pictures, downloads and the like and ? most handily ? has both SD and USB connections, thus enabling you to easily switch between your Wii?s SD card port and your PC?s USB port.

At around Ł25 it?s a godsend for those who aren?t lucky enough to have one of those clunky generic card readers or an inbuilt SD reader on their PC. It's a must, whether you want to easily port all your photos from any computer to your Wii, or merely email your game saves with your highest scores or show off when you go round to your mates? houses for communal Wii?ing sessions.

It?s also handy for quickly transferring any data you have on the Wii over to any spare space on PC hard-drives, so there finally is a use for all those old PCs you are too lazy to bother eBay?ing. They are now amazingly handy Wii archives!

Next up, if you are unfortunate enough to have not yet equipped yourself with a wireless network, then Datel?s WiFi MAX is probably one of the easiest, cheapest way to get your Wii and/or DS online. As with the slightly more expensive first party device, you just plug it into your PC and you have a Wireless Access Point. If you are not yet part of the Wi-Fi future, then for around Ł30 SPOnG suggests you really have no excuse to continue living in the past.

Finally, as mentioned above, Datel informs us that they are currently working on a ?Freeloader? solution in order to allow UK gamers to play US Wii titles. We hope they crack it soon, as all at SPOnG are very keen to play some more Trauma Center: Second Opinion which is out now in the States, yet not out in Europe till later next spring.

We will of course let you know the minute we hear the good news on Wii Freeloader from Datel.

Ditto 13 Dec 2006 23:53
2/4
Freeloader was amazing, and if they produce the same thing for Wii then it deserves to real like a press release!
more comments below our sponsor's message

Gotta get my Wii now. I'm so happy. I'm gonna go away now and have a small but joyful crying moment.

Now if Datel could come up with a legal flash card so we can play our WVC games on DS on the move, i think I'd have to leave Datel something in my will.

ohms 14 Dec 2006 09:58
4/4
wow, would be cool if they managed to make one so soon, but I think I'd have to go for a US Wii, purely because I don't want to download PAL versions of Virtual Console games. Region locking games that are so old is the dumbest thing they could have done.

on another Freeloader related issue, does anyone have Twilight Princess on GC yet, the US version I mean. Mine is in the post, but I have no idea if it will work with the Gamecube Freeloader.