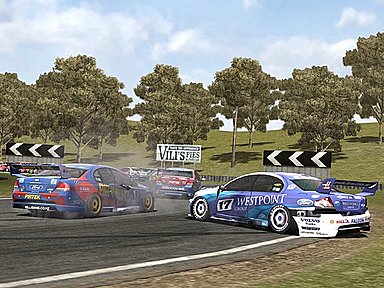 Feel the wind in your hair!
All Images (8) »
Philips has announced this week that two more major publishers/developers have been signed up to produce games which are ?amBX-enabled? ? allowing for realistic in-game wind, temperature and ambient lighting effects.

The company will partner with Codemasters and Introversion to amBX-enable TOCA Race Driver 3 and the upcoming titles DEFCON and Darwinia (all on PC).

The Philips release we just received informs us that the company, ?...will utilize a special scripting language in Codemasters and Introversion titles that will redefine the experience of playing games by extending the game world out of the screen and into the real world.?

What is this amBX, then? It?s basically a bunch of wind and lighting effects which are created by a number of add-on peripherals including satellite lights, wallwasher lights (both offering 16 million different colours), twin-bladed desk fans (that can drop the ambient temperature on the skin, or on full-blast at 5000rpm can represent strong wind and almost blow your hair off!) and rumbler effects (via rumble wrist-rests and mouse mats).

The idea being that the combination of ambient lighting, sound, vibration and air movement at the correct moments in a game serve to increase the sensual and immersive feel of being in the game.

In TOCA for example, racers will feel the wind in their hair through the amBX fans and see the flash of lighting through tree lines, tunnels and landscapes via the amBX LED lights all in the real world around them.

Armchair generals in DEFCON will actually see the blinding light as their intercontinental ballistic missiles land; feel the ground rumble through the amBX rumble pad as fallout rains down around them and feel the full force of explosions via the desk fans. At least, this is the idea.

SPOnG had a brief demo of the technology at E3 and, while we were impressed with the concept, we couldn?t help but wonder which developers and publishers would actually make use of it. Isn?t this the kind of thing that will appeal to a limited number of hardcore PC gamers, thus having a fairly limited potential market?

It seems this is not the case. No doubt with the helpful backing of the Philips brand, the company has already signed up a number of major developers/publishers such as the aforementioned Codemasters and Introversion. These two join an ever-increasing list including THQ, Kuju Entertainment, Revolution Software and Sumo Digital. Previously announced games that are enabled to work with amBX peripherals include Broken Sword: The Angel of Death and Kuju's Rail Simulator.

Additional announcements are to be made on other amBX parners in the coming days, so stay tuned for that news.

What of the future? We spoke to an amBX rep this morning to ask if there were any plans for new ambient/sensual in-game effects such as Smell-O-Vision. He replied [laughing],?Heh, that?s all very ?Futurama?, but some gamers in some of our focus groups in the States have raised these kinds of ideas ? ambient smell effects, dry-ice machines, electric-shock vests, water effects and the like.?

Although he hastened to add, ?We are not so sure about the safety implications of spraying water on gamers sat at their PC! Though the dry-ice smoke effects might well be something we could look into.?
Companies: Codemasters Introversion Philips
Games: Broken Sword: The Angel of Death Darwinia Rail Simulator TOCA Race Driver 3

There was, however, lots of dry ice.