Time to ship over a US Wii? 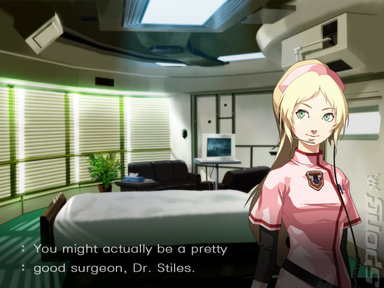 Oooh I say! Naughy doctor!
All Images (7) »
SPOnG can confirm that one of our clear-favourite Wii titles, the utterly charming and engrossing Trauma Center: Second Opinion will not be out in Europe till March 2007.

TC:SO has gone back to next spring as the game has to be translated into seven different European languages, a source at Nintendo UK told SPOnG earlier today.

As we can hardly bear to wait much longer to play this wonderful game, SPOnG has considered changing our minds and snapping up the US Wii console one of our NYC-based stringers kindly offered to ship to us earlier this week. Purely to play Trauma Center again.

After all, there?s only so many times we can return to Nintendo?s Wii House in London pretending to play the game for review. We suspect we would be caught out after the tenth or twelfth visit?

soanso 29 Nov 2006 15:29
1/3
Why aren't games translated when the script is written and finalised?
I mean honestly why?
That way there'd never be delays.

jordanlund 29 Nov 2006 17:39
2/3
It gets better... the Wii version is functionally identical to the Nintendo DS version. I'm assuming the script has already been translated for the European market, all they need to do is import the DS translation.

The good news is that if you Euro folken have access to Trauma Center on the DS, it's the exact same game.

I guess the bad news would also be that it's the exact same game. :^(

Future improvements to the TC series could include online play modes on both DS and Wii, so there's more fun to be had if Atlus build on its success. I'd also like to see some chapters out on the street, 1-4 player option and random special hidden stages.

I think Nintendo should look a launching a headset for Wii too. It'd help with this game.

This is what ails me about being in the EU. When it keeps expanding, we have to wait longer for our games. In the states the main languages are Spanish (Mexican), and English. I agree that in this day and age of multi language dvds for films, we should be getting the same for games too. Developers should look into this.

Now a good game will most likely get overshadowed again because of PS3 this time. I pray it ain't so.