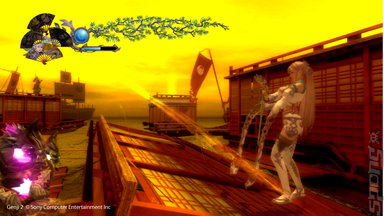 All Images (7) »
?Game Testing? ? yes, that thing, it?s, like, soooooo booring. This tedious process interferes with the really important ?outcome? of getting the ?deliverables? into ?the channels? in order to ?create purchaser-seller synergies going forward? (Free SPOnG Business B.S. translation service = getting games to the shops and getting cash from the gamer.) And when it comes down to it, you can always release a patch at some point.

But stop, wait, read this cautionary tale? SPOnG was aware that the PS3 game, Genji, was a ?bit of a dog?. Our lucky reviewer who already has his mitts on a PS3 debug kit told us so. In fact, everybody we know who has played the game gives us that funny puzzled look while raising their top lips in such as way to say ?what the???

However, it wasn?t until reading Chris Kohler?s always excellent gaming column on Wired.com this week that we realised the extent to which the game is basically broken.

According to Kohler who tells a tragic tale of game-destroying slapdashosity, while playing ? or attempting to play the game, he found himself randomly belting ?thingamabobs? in order to progress. He continues with some ire:

?But even that wasn't so bad when you compare it to the fact that I didn't know what to do next, and I wasn't finding anything because there was nothing to find. So it was back to GameFAQs' board, but this time there was no solution. Just confirmation that there was supposed to be an item for me to pick up, but due to a glitch in the game it disappears after a certain point. And of course, I'd been diligent and saved my game, meaning I was completely screwed. I'd have to start the game over.?

So, in less than happy-play-nice mood, he makes a few suggestions to the Genji dev team:

You might want to avoid leaving major bugs in the game that ruin your saved progress and force you to restart the whole thing.
Companies: Sony
Games: Genji: Days of the Blade

I think i had the same bug with Beyond Good and Evil, i'm at the part where you need to input those two codes beneath the shoes of the kidnapped pig guy, first code worked, the second one doesn't... :'(