Something For The Weekend, Sir? Today’s UK Game Releases

War! Huh! What is it…ah. Sorry, we did that last week… 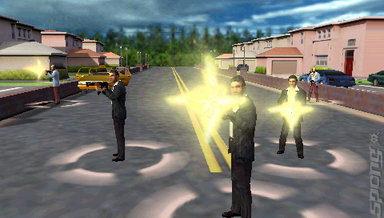 Scarface
All Images (5) »
Got a bit of disposable cash this weekend? It's the run up to Christmas, so probably not. But if your Significant Other (or Mum) has started Christmas shopping for you, here's a round-up of what they can get you this week. And what a pleasant and varied week it is, too.

So we'd best start with the monster of the bunch: Gears of War. Huh! (Sorry). The next generation of the FPS! The game the Xbox360 was built for! Cower, for it has arrived! Big words, we know, but when you play it, you'll understand. Rife with hulking, chiselled men and big ugly things to shoot at, this brute of a game takes full advantage of the 360's next-gen horsepower to deliver a scarily immersive experience. And it wants to eat your children. For more on all things gear-y and war-ry, check out SPOnG's dedicated Gears of War page and the GOW review.

On a slightly less gritty note, we also have the battle of the Tonys, with Scarface: Money. Power. Respect from Vivendi going up against The Sopranos: Road to Respect from THQ in an all-out turf war to become undisputed Kingpin of the gaming underworld! Well, not literally. Or figuratively, for that matter. The former, available on PSP, alternates between strategy-based empire building and general gun shootery, whereas The Sopranos: Road to Respect on the PS2 puts you at the bottom of the mafia ladder and demands that you climb. If booze, broads and bullets are your thing, then this is a good week for you. For more, check out our Scarface and Sopranos pages here and here respectively.

If you fancy something a bit less gritty but no more socially acceptable, we have a third Tony weighing in. That skater chap...whatshis name... Tony Hawk's Project 8 from Activision hits the shelves today for the Xbox, PS2 and the 360. The gaffer has been playing it all week, drowning out the office stereo and the ancient industrial sounds of Einsturzende Neubauten with rubbish, generic skate metal and generally being a 'flipping' nuisance (see what we did there? Flipping! SPOnG made a funny!). He tells us it's 'sick'. We pretend we don't know what that means, but we're just as hip as the next chap in a pair of Adio socks, even though we usually shop at TK Maxx.

And if none of the aforementioned float your proverbial boat, we would suggest getting your hands on Dirge of Cerberus: Final Fantasy VII from Square Enix, making its debut on the PS2. We think some of you might have been waiting for this (Well, duh! - Ed).

Now go! 'Tis nearly Christmas, and someone must buy you games! If you think that might not happen, go treat yourself to an early gift or two.
Games: Dirge of Cerberus: Final Fantasy VII Football Manager 2007 Scarface: Money. Power. Respect. The Sopranos: Road to Respect Tony Hawk's Project 8