Depressing reading if you are a non-multi-tasking male 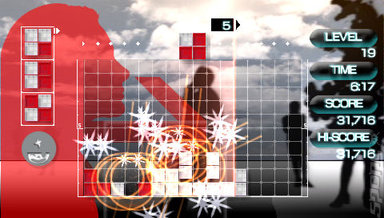 All Images (4) »
Buena Vista Games' PR company sends word to SPOnG this grey, depressing dreich-y day that it has actual proof that women are better than men.

Well, what BVG actually sent is a report on a study, which it commissioned, from a ?leading female U.K. psychologist?. Said report apparently backs up the theory that women may be physically and emotionally programmed to be better than men at strategic games such as Lumines II and Tetris.

U.K. psychologist Susan Quilliam claims that her study proves that, "Contrary to popular belief women don't want fluffy themes in their games?[women?s] sensory perception and wider peripheral vision means they spot game elements more speedily and successfully than men do - and Lumines II's structure and design allows female players to capitalise on all these strengths".

According to Quilliam, Lumines II appeals ?to the female ability to analyse, categorise and link large amounts of small detail".

Interestingly BVG is pimping Lumines II as a game that turns your PSP into an ?interactive iPod, enabling players to listen to their favourite tracks whilst playing the game.? Try doing that while walking down the street without damaging something or someone.

SPOnG has requested both a copy of the full report and an interview with its author, 'leading UK psychologist' Susan Quilliam. With this in mind, we would like you to supply questions that we can put to Ms Quilliam ? who has an honours degree in Psychology, University of Liverpool, by the way. Please proceed to the forum immediately.
Companies: Buena Vista
Games: Lumines II

king skins 16 Nov 2006 16:28
1/2
This is a generally held belief that I've read in a couple of places that women are better at multitasking than men. But then the trade off is that men are better at concentrating and focusing on a single activity.

So all of these difference between man and women have trade off's and a very generalized.

So to balance out the "?[women?s] sensory perception and wider peripheral vision"

So you ya know we're better off working together... ;)

Heather 9 Feb 2009 20:37
2/2
Drawing attention to the fact that the scientist who led the study is female, seems like an attempt to invalidate her work solely based on her gender. This is an attitude from the dark ages, I'm afriad. If it were a male scientist proving something, I wonder if you would be so quick to draw attention to his gender....
Posting of new comments is now locked for this page.