No need to waste money on retro arcade cabinets any more! 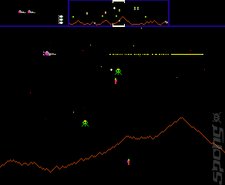 That?s the news this morning folks! Midway?s arcade classic sideways scrolling shmup, Defender, is set to hit Xbox Live Arcade later today. (UPDATE: Just in, from Microsoft - ?Hot out of cert, we?re aiming to bring you ?Defender? today on Xbox Live Arcade. It did not hit at the usual time this morning but our team is working really hard to get it to you as early as possible today.?)

SPOnG-News has fond memories of hours lost in space while playing the game on the original arcade cabinet at our local swimming pool as a child. Now we get to play the game again, re-living the arcade glory days. sw

Plus, of course, there is a free trial demo so you can remember the sheer joy of clearing the screen in one fell swoop with a smart-bomb, or taking the life-or-death chance of getting out of particularly sticky situations by blasting off into hyperspace.

Defender is, alongside Space Invaders, Pac-Man and Donkey Kong, a true arcade classic. Its in-game sounds and the timeless gameplay have seeped into the culture like few other games since. Indeed, one of the greatest declarations of love in popular music in the last few years has been the Beastie Boy?s memorable line, "And if you play Defender I could be your hyper space!? from Body Movin?.

SPOnG?s keen to see how it stands up twenty-six years on. Defender on XBLA features classic and enhanced graphics, Xbox Live multiplayer options (including co-op), plus the expected Live leaderboards and various unlockable achievements.