See it first right here on SPOnG - and download your Mizuguchi-designed screensavers PLUS your chance to WIN LUMINES II! 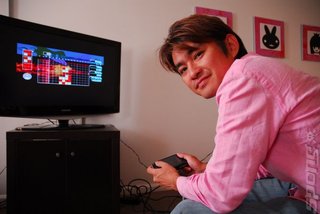 All Images (7) »
SPOnG?s been mesmerized over the past week by Tetsuya Mizuguchi?s latest game on the PSP, the hypnotic and crack-addictive puzzler, Lumines II.

This man used to be most famous for designing the critically-lauded (but commercially somewhat ignored) REZ on the PS2. In SPOnG's opinion that's going to change when Lumines II starts to spread across the planet bringing deep joy to all.

Mizuguchi preaches a refreshingly simple philosophy of game design. He told a gathering of the UK?s top games design talent at Brighton?s Develop conference earlier this year: only make games which inspire you and always stay true to the initial creative spark which triggered the game idea.

Now you can listen to and see the man himself in his latest interview when you download this - exclusive to SPOnG - video conversation with Mizuguchi-san by clicking on one of the links below:

(Sorry, these videos are no longer available)

Don't miss your chance to win one of 5 copies of the game itself - and a PSP to play it on!

As well as giving us the exclusive video interview for you to download, our good friends at Buena Vista Games have also let us have three exclusive screensavers ? each with a Lumines II vibe. To be fair, it's not often we'd get in any way excited about some screensavers - 'exclusive' or not - but these are no NORMAL screensavers.

They are Mizuguchi-designed screensavers. So you are actually going to appreciate taking a few seconds out of your day to install them on your PC. Really.

Then you can gaze at them and daydream about falling blocks of colour, beautiful electronic soundscapes and nearly, just nearly getting to the New Order level after the fiftieth attempt at Lumines II as you notice the clock on the wall passes the 3am mark....'

Lumines II - play it, hear it, love it?
Lumines II adheres to Mizuguchi?s philosophy of simplicity. It?s inspiring, addictive and deliciously more-ish. If you haven?t played the original Lumines then you are in for a proper treat with Lumines II. For the uninitiated, Lumines II looks like a fairly standard puzzle game, in the Tetris-inspired style of manipulating falling blocks.

For those in the know, who?ve played the predecessor to this beautifully (dare we say ?perfectly?) designed game, you will be aware that this is a game that needs to be played to be understood. Merely describing how lining up four falling squares of the same colour in the shape of a larger square means that the larger arrangement of shapes disappears, with the aim being to manipulate the falling shapes in such a way that they don?t pile up to the top of the screen? well, doesn?t sound very inspiring does it?

But that?s what Lumines II is ? inspiring ? in terms of it?s genius, abstract design, which will have you regularly missing bus-stops, tube links and staying up till the early hours for ?just one more go.?

Of course, what makes the game stand apart from, well, pretty much every other PSP game on the market, is the fusion of sound and gameplay. If, like SPOnG, you are going to be regularly playing it on the move then Lumines II is a game that requires a good set of cans (otherwise, you really will start annoying the other sour-faced commuters on the bus first thing in the morning, believe us!).

The rate that your bigger blocks are cleared from the play area depends on the speed of the timeline which moves across the screen, which is dependent on the rhythm of the particular tune that?s playing. Again, after a matter of minutes of playing the game, you become highly attuned to the rhythm and how it affects your attempts to match up the same-coloured squares.

It?s a hypnotic, rave-inspired sensation that only Mizuguchi could have created. The game is a paean to everything that?s to love about electronic music. SPOnG defies anybody who likes electronic music ? from weekend ravers through to serious musicologists ? to pick up Lumines II and not become enthralled. Hell, we defy anybody who likes music or games - full-stop - to not fall head over heels with Mizuguchi?s latest bobby-dazzler on the PSP. And if you don?t own a PSP yet, this is perhaps the best reason to go out and buy one.

Lumines II comes jam-packed with loads of new content and game modes, plus tons of quality licensed music including New Order, Beck, Missy Elliott, the Black Eyed Peas and Fatboy Slim. The sheer depth and longevity of this (initially) simple-looking puzzler is mindblowing.

SPOnG will be missing buses, tubes and early nights for some time to come because of Lumines II. Yeh, thanks Mizuguchi!