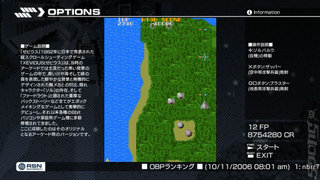 All Images (14) »
In news that makes us feel nostalgic as we recall the day we unwrapped our PlayStation 2 and booted its Namco Racer, complete with bonus missing reflections and general playability... Namco Bandai has released some telling shots of the PlayStation 3 launch title Ridge Racer 7.

The images here come courtesy of our Japanese furenzu at Impress Game Watch, and show some under-the-bonnet goodies. As well as split-screen multiplayer modes, Namco's much-vaunted online battle system seems to be coming together.

Time Attack addicts can also pit their frustrations against other players from across the globe in the game mode that caused one ex-SPOnG writer to punch a hole in his wall and bite his controller leaving clear teeth marks in a box-frest DualShock 2.

Perhaps the most interesting news to anyone feeling old while reading this piece is the inclusion of the classic up-scrolling shooter Xevious to the mix; ousting Rally X in what has become a glorious tradition of load-game retro gems from Namco.

Enjoy digesting the images, but bear in mind that representations of next-gen Ridge Racer weeks from launch differ greatly from the screens put out earlier this year...

Let us know in the forums (Surel, ?fora? ? Classical Ed.) if your expectations have been met.