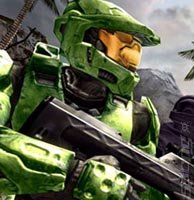 Halo 3, the very-much sought after FPS update from Bungie, will come in special edition form next year, with the premium version coming packaged inside a stand-up plaster version of the series protagonist's headgear.

The special edition, henceforth referred to as the Halo 3: Shiny Helmet Edition, comprises an impressive four discs: one being the game, another containing documentaries, and interviews with the crew; the third filled will have some of the bonus goodies already known about, including Spark of Life and Red Vs Blue; the final disc will hold every cut scene from the series to date in high-definition.

As you may be aware, this information emerged when scans from Swedish games mag?, Level displayed online. Being an upstanding and respectable outlet we didn't run with them, though thanks to everyone who emailed them in.

Developer Bungie commented on the leak over the weekend, simply stating, "The leaked scans this morning caused a huge fuss, and we're not going to discuss any of that stuff here today... The hi-res images will be available in all sorts of outlets eventually? and we'll go into more detail - and answer some of your questions at that time. And that won't be the only Halo 3 info this year? there are one or two surprises still to come."

Of course, expect everything Halo 3-related fresh on SPOnG as it breaks. If you missed it, catch video footage of the game right here.