Cooking Mama on DS this Christmas

Plus, 'Cooking with International Friends' Wii version planned for 2007 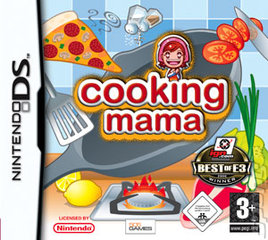 Now, a tidy mis-en-place is always required...
All Images (11) »
Europeans will finally get their hands on the bonkers DS cooking simulation that is Cooking Mama (pictured here) this Christmas, courtesy of 505 Games.

The company is clearly aiming for the casual Christmas stocking-filler market with Cooking Mama, which has already been selling like hot-cakes (sorry) over in Japan and America.

Nintendo’s huge pre-Xmas push behind the DS, which SPOnG told you about earlier this week, can only help to boost sales of these types of casual titles.

Taito/505 Games will also be releasing a Nintendo Wii version in 2007 entitled Cooking Mama: Cooking with International Friends. More on that as we get it.

Cooking Mama is a game squarely aimed at young girls and is not to be confused with the recently announced Nintendo Recipe Book for DS, due in Europe later in 2007; that,rather nattily, comes with a fridge magnet so you can stick your digital DS recipe book on your fridge door.

For those still looking mildly baffled, Cooking Mama puts the player in the role of superstar chef in training. Thankfully he is not called Jamie (There is nothing wrong with the lad Oliver: discuss. Culinary Ed.) Nigel or Ainsley.

From 505’s press release detailing the game, “Under Mama’s careful tuition and scrutiny, players will utilise the full functionality of Nintendo’s handheld system in order to prepare and create over seventy distinct and delicious dishes. The menu includes simple snacks such as fried eggs, to full cordon bleu-style culinary masterpieces.”

Using the DS’s stylus as your all-in-one multipurpose kitchen tool you get to chop, slice, pan fry, knead, grate, mash, tenderise, mix, peel, carve and roll. Clearly, it goes without saying, don’t try to use the stylus as an actual kitchen tool (although it might work as an olive skewer!).

Once you’ve completed your dish, you can then add finishing touches to the table presentation with the stylus, before Mama’s customers greedily wolf it down (or not, depending on your culinary skills). You can also cool down dishes that are too hot by blowing into the DS’s microphone.

Cooking Mama features over 200 mini-games, a practice mode and the ability to earn bronze, silver and gold cookery awards. You can also play with up to four other friends via the unparalleled DS Wi-Fi system.

All in, it sounds like the perfect gift for younger daughters and nieces this Christmas. Interestingly though, a number of the older gentlemen in the SPOnG office are already bickering over who gets to review it. We’ll be testing out the title later in November to bring you our gourmet chef’s considered opinions!

There is no doubt who will be reviewing it. No doubt at all. Dictatorial Ed.