Vivendi and EA show off the in-game stars 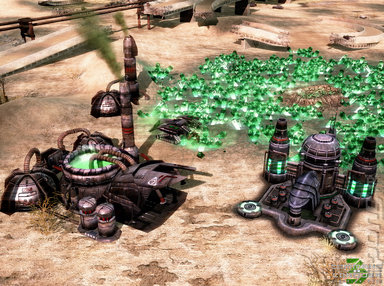 Eragon will feature the voices and likenesses of the stars from the movie, including Edward Speleers (who plays the lead character Eragon), Sienna Guillory (Arya in Eragon, Jill Valentine in Resident Evil: Apocalypse), Garrett Hedlund (Murtagh in Eragon, Don Billingsley in Friday Night Lights), and Robert Carlyle (Durza in Eragon, Gaz in The Full Monty).

Vivendi has been keen to bill Eragon as, ?this year?s Lord of the Rings? - what with there having already been three Lord of the Rings movies, leaving Hollywood to fill the fantasy gap with this as-yet unknown newcomer. The game, as with the movie it?s based around, is also an unknown quantity. It?s out in November on all formats, with the movie to follow later in December.

The game?s storyline sounds like standard fantasy ?fayre? to us though, with players taking the role of Eragon, riding upon a dragon called Saphira, battling against an evil king. Magic and spells and the like are also, as you would expect, heavily featured.

SPOnG will be setting one of our obsessive fantasy nerds on it as soon as we get code to let you know if it lives up to Vivendi?s hype.

News also just in from EA?s ?hiring the stars? department is that Command & Conquer 3 Tiberium Wars is to feature an ?all-star celebrity line-up for its high-definition, live action video sequences from critically-acclaimed television series such as ?LOST? and ?Battlestar Galactica,? blockbuster films such as Star Wars The Empire Strikes Back and The Return of the Jedi (1980, 1983), Top Gun (1986), Starship Troopers (1997), and The Wedding Crashers (2005), and a former Miss USA pageant winner.?

Blimey! C&C3?s cast includes Tricia Helfer, Josh Holloway, Michael Ironside (yes, him again!), Billy Dee Williams (Lando Calrissian!), Grace Park, Ivana Bozilovic, Shauntay Hinton, and some others SPOnG has never heard of either (come on, give us more info about them than IMDB can by planting your seed of knowledge in our forum).

The game?s producer Mike Verdu explains more, ?Telling a story with a mix of live action and high-end movie-quality computer graphics has been one of the hallmarks of the Command & Conquer series. These very talented actors have added tremendous depth and dimension to the C&C 3 game experience.

?Having completed my shoots for the game recently, I can honestly say that it was one of the most fun projects I?ve worked on?and my costume was awesome,? said Tricia Helfer (of ?Battlestar Galactica? fame), in what must certainly win the most anodyne Hollywood quote of the week award!

Billy Dee Williams at least wades in with a more considered PR quote, adding, ?The game?s story and universe are immersive and drew me right in. I was intrigued by my character, GDI Director Redmond Boyle, because he has more depth than I expected from a videogame personality. His polished exterior gradually breaks down as the world is plunged into chaos and he eventually shows his true nature under extreme pressure.?

C&C 3 is bound to be a monster of a PC game when it releases in 2007, and SPOnG will of course bring you our full considered preview in due course. There?s plenty of life in the old beige box yet.

dun really play the RTS so much any more, but the C&C series has always been some of my favorites in the genre