Is ?casual gamer? a euphemism for ?female?? 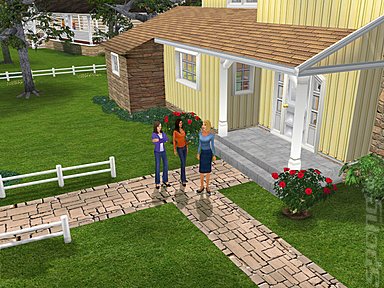 All Images (9) »
Sneer and jeer all you like boys, but Buena Vista Games has just sent SPOnG word that the Desperate Housewives game will be out in the UK on November 3rd, catering to those many (mostly female) fans of the show who cannot wait until the next helping of the new TV series early in 2007.

It seems that videogames are no longer the sole-preserve of boys waggling their joysticks alone in their bedrooms (or in online fragfests with their mates).

Gaming hasn?t been a boys own pastime for some time, of course, particularly since EA?s blockbusting Sims series did the job of convincing women in their droves to return to a pastime that many of them had given up on in their early teens.

The ladies are getting in on the act, in a big way, with many of the major games industry players actively courting casual and female gamers, shifting the focus of publisher?s marketing departments away, bit by bit, from the core demographic of young to middle-youth males. Nintendo?s strategy for Wii being the most obvious example of this shift in attitudes.

The Desperate Housewives game is a lifestyle simulation in which the player takes on the role of an entirely new housewife who moves to Wisteria Lane and helps to unlock the many delicious scandals hidden in the seemingly ?perfect? neighbourhood of beautiful people, picket fences and manicured lawns.

?For the hours during the week between the Sunday night episode airings, Desperate Housewives: The Game is the ideal way for series fans to stay connected to the experience,? said Graham Hopper, senior vice president and general manager, Buena Vista Games.

SPOnG just spoke with one of BVG's PR reps in the UK, to find out a little more about how they are looking to manage the advertising and public relations surrounding the title. Specifically, how they intend to market a videogame to aspirational younger women who are dedicated Desperate Housewives fans, but who might not have picked up a videogame in years, if ever.

?News and reviews of the game will appear across the board in a range of leading women?s lifestyle magazines, such as Elle, Cosmo, Glamour, Heat, as well as the more weeklies such as Closer and Now,? she told SPOnG.

Meanwhile, Jane Pinckard, who runs GameGirlAdvance, commenting on Desperate Housewives has noted that it has one of the major, heavyweight brands to appeal to this casual, female demographic. But she also expressed reservations that the industry's definition of "casual" has become an inadequate euphemism for "female".

The BVG rep dismissed this when we suggested the idea to her, claiming that, ?surely anything that expands the demographic can only be good for gaming??

Let us know what you think in the forums. And yes, like you, we may publicly pretend to hate Desperate Housewives, but in the secret privacy of our own homes we all watch it as avidly as our partners.

Desperate Housewives is out priced Ł20 next month. If you are in doubt as to what to buy your partner, sisters or even your mum this Christmas, then you might not go far wrong with this one.

I could buy her a PS2, 360, GameCube, PSP, DS or Mac version and she'd be happy enough. But a PC version just won't cut the mustard...


[24 May 2007, 07:09: Message edited by 'DoctorDee']
As if your spamming wasn't offensive enough on its own, you have clearly searched for threads relating to Desperate Housewives to pimp your free washing powder. So that's gender stereotyping too!