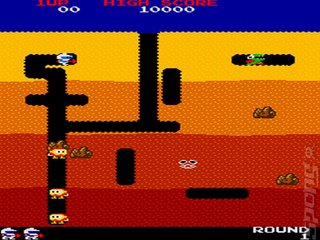 Wednesdays just get better, what with the constant stream of classic arcade titles onto the superb Xbox Live Arcade service. Today is a rather special XBLA Wednesday, with a number of SPOnG staffers going misty-eyed when Microsoft informed us that Dig Dug hits XBLA today.

Dig Dug is now in the line-up alongside other Namco classics such as Pac-Man and Galaga. You can go straight onto Xbox Live now and grab the free demo, should you need reminding what the game was about.

And if you like what you play, then you can grab the full version for 400 Microsoft points. XBLA Dig Dug also boasts 720p HD support, some XBL Achievements, and, of course, the online Leaderboards so you can tan your mates high scores late into the night.

Cynics may scoff at such simple arcade pleasures being re-introduced into our living rooms, but they cannot argue against the fact that XBLA is achieving one of Microsoft?s main objectives in the casual gaming space.

That is, it?s successfully encouraging older, lapsed gamers and girls back into console gaming. SPOnG has polled pretty much all of our friends and colleagues who use Xbox Live and XBLA, and it?s almost unanimously agreed that mates who haven?t picked up a game for years, as well as previously uninterested wives and girlfriends, are instantly charmed when a retro better-than-arcade-perfect classic pops up on the telly.

So, as Nintendo continues to shout about how revolutionary the Wii strategy is, in terms of appealing to new markets, Microsoft has been quietly getting on and doing it via the magic of XBLA.

Next up on the XBLA list of justice are Contra and Lumines Live! SPOnG will bring you news on when to expect those and all other XBLA news as soon as we get it.