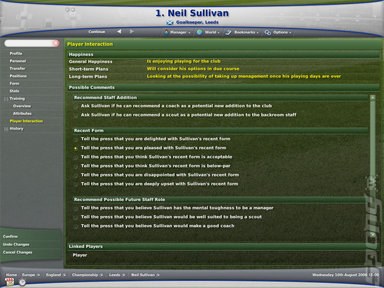 All Images (4) »
The football season is well and truly underway, with star players, managers and WAGs dominating the daily news, both on the sports pages and in the lurid gossip columns of the red-tops. So it?s good news for fans worldwide (and bad news for their football widows) to hear the latest on what many here in the SPOnG office will fiercely argue is the greatest football management game of all time.

If you are a fan of footy management games and haven?t yet checked out the free downloadable demo of Sega/Sports Interactive?s Football Manager 2007 then you might want to down tools and go and grab it straight away.