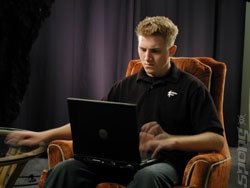 Fatal-One-Tee having a nice sit down
The fifth international event in the World Series of Video Games kicks off in the UK tomorrow with the UK Gaming Championship taking place at the Trocadero in Piccadilly Circus, through till Sunday evening (hours 10-10 Friday and Saturday, and 12-5 on Sunday, if you fancy popping down.)

And whist it is hard to see the event ('as presented by Intel') garnering the amount of mainstream consumer and press interest as the actual World Series (of baseball, not poker or videogames!) it's good to see that competitive gaming is gradually being taken a little more seriously.

In order to ensure that it's not taken too seriously though, the organizers have lined up professional self-harmer Steve-O, star of MTV's Jackass, to be around on Friday evening for autograph signings, game play, and his 'unique brand of virtual mayhem' (mind boggles! - Ed).

The event will feature professional gaming tournaments in Counter-Strike 1.6, Quake 4 and Warcraft III: Frozen Throne, with over Ł40,000 in cash and prizes up for grabs. The top gamers from around the world are flying in for the event, including Fatal1ty, Stermy, Toxic, Team Fnatic and England's own 4 Kings.

OMG! SPOnG's gaming nemesis, none other than FATAL-ONE-TEE is going to be there! We will most likely be seen stalking the legend over the weekend and asking him why everybody else pronounces his name wrong.

Saturday night also features a "Miss World Series of Video Games" contest. See you there. Admission is free to pre-registrants who sign up at TheWSVG.com or Ł1 at the door.