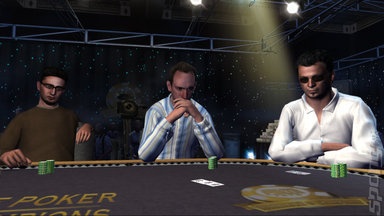 All Images (3) »
SPOnG paid a visit to Microsoft?s swanky PR company in London?s oh-so-fashionable Soho earlier today for a full demonstration of the Xbox Live Vision Camera and the free gesture-based game TotemBall.

Niftily, the full version of TotemBall is freely available now on Xbox Live, with the cameras in UK stores in this coming Friday, aggressively priced at a rather agreeable Ł34.99 (that includes the camera, one month's Xbox Live Gold membership and a headset) or Ł54.99 for the same pack with an additional 12 months Live membership and three Live Arcade games.

What?s more, fans of online poker will be glad to hear that a Texas Hold 'Em auto-update adding XBLV Camera support is due out in the next couple of weeks, plus both Activision's World Series Poker and Ubisoft's Rainbow Six: Vegas will also include camera support. EA Sports are currently thinking about how to make use of the technology too. SPOnG can?t imagine they?ll be thinking too long about what is clearly a no-brainer.

Read on for all the details you?ll need and a few random thoughts from Microsoft execs on the future of Live Vision, a future in which we?ll all be playing all our games online with detailed, realistic avatars of our actual friends? faces mapped onto the characters playing alongside us in some of our favourite, well-known games (or ?game spaces? as Microsoft would have it).

Firstly, what is TotemBall? If you have Xbox Live and are toying with the idea of getting a camera, then you can download a video demo which will run you through the game. If not, then it?s basically a kid/girl-friendly game in which you move both your arms up and down to control a cutesy little fella called Pterry the Pturtle, guiding him around the colourful cartoony game world to collect lost musical totems and return them to his tribe.

The developers from British studio Strange Flavour gave us a full demo of the game, which looks like it?s going to be an ideal way to introduce those hard-to-get casual and non-gamers into the world of Xbox. Included in this pretty impressive freebie alongside the basic story mode is a co-operative juggling game (mate juggles whilst you wave your arms about like a pretend plane loony); 3D pinball (the most fun-looking bit!); freeplay (no dying!); super challenge (hardcore!) and TotemJam, in which you mix Totems to make beautiful music. If it cost Ł20, it would probably get a seven out of ten. The fact that it?s free makes it a niner.

The chaps from Strange Flavour also told us that they are in the early stages of development on two more XBLV-enabled games due for early 2007, and they will be releasing more downloadable maps and other bits for TotemBall in the future.

More interesting news (for gamers) is the fact that the XBLV Camera allows you and your Live-enabled mates to transplant your grinning, gurning faces onto the faces of in-game characters, using Digimask technology which apparently produces an almost photo-realistic version of you on screen. It's the future! We?ll report on this as soon as we?ve experienced it. SPOnG?s anticipation levels for playing Ubisoft's Rainbow Six: Vegas with our mates' face-mapped on just went up to ten.

There are no current plans for cross-platform 360/PC videochatting, although the technology can only be a couple of years away at most, and this surely is going to be a key feature in Microsoft?s Live Anywhere cross-platform future.

There are also no definite plans for Keep Fit-type games, but again, the execs this morning said they could imagine that this is the type of game (Game? Keeping fit? Shurely shome mishtake! - Ed) that will be ideal for use on Xbox Live Vision in the future.

It also struck SPOnG that as an anger management tool, games which make use of the Xbox Live Vision Camera?s Digimask-enabled face-mapping feature could also be of some value. When having a minor disagreement with friends, for example, you can now enter a violent game with them on Xbox Live and shoot their faces off!

Perhaps one of the more worrying trends which one of the execs demo?ing the camera indicated to us earlier is that our wives and girlfriends are far more likely to pick up an Xbox controller (instead of hiding it under the sofa, as usual) when they realise that they can have free videochats with their friends and sisters on the telly. This could prove to be the source of serious domestic unrest, especially if the wives/girlfriends realise the addictive nature of XBLV-enabled games.

tg0006 4 Oct 2006 21:33
2/7
wtf, as a sony fan ive had the merceless verbal beatings and abuse from xbox and nintendo (i guess mainly nintendo, but their are some xbox people who do to)fans alike that all sony can do is copy another companies idea and now, xbox 360 camra for gesture based games, and not a single word about how sony had that idea first.
more comments below our sponsor's message

horngreen 4 Oct 2006 21:58
3/7
Ok, Ok,Ok it was Sonys idea first, happy? I doubt anyone will copy Sonys rumbleless controller anytime soon though or the rumor of having to buy EVERYTHING for GT4 with a billion microtransactions. This is also the first Sony console to allow more than two controllers without the need for a multitap. Lets not forget Sony being the first with a hard drive...Oh wait, nevermind.

tyrion 5 Oct 2006 08:14
4/7
horngreen wrote:
This is also the first Sony console to allow more than two controllers without the need for a multitap.
And this has hurt sales of PS1 and PS2 how exactly?

horngreen wrote:
Lets not forget Sony being the first with a hard drive...Oh wait, nevermind.
Well, the PS2 was released in the USA on 26th October 2000,13 months before Xbox, and had a hard drive bay added that the Japanese model didn't, so the intent was there. That Sony hardly followed up on it is a valid counter point, but then so is Microsoft making the hard drive "optional" on the 360.

And as to the other companies copying Sony's eyeToy? That's the way these things work. I was surprised that there wasn't an Xbox camera out within a month of eyeToy being released.

Let's face it, none of the big three are huge innovators in gaming, they all rely on research done outside of their companies to make their own products better.

What they have done is refine those technologies and popularise them in the console market. A bit of cross pollination of ideas is to be expected and even welcomed.

On a more serious note, I think it?s more of a complement to the company that is being copied. It?s such a good idea that your competitors are using it!
I?m more surprised that Sony have not come out and said so themselves

Svend Joscelyne 5 Oct 2006 12:22
6/7
SCiARA wrote:
I'm more surprised that Sony have not come out and said so themselves
I don't see why they should... it's only a camera. :i Face-mapping's cool, but I was geared up about that when the prospect was using it for Perfect Dark on N64. Since that didn't happen I got an eyetoy and SEGA Superstars, and I've since moved on. It's a bit of a gimmick.

Sony usually prefer silence as a counter-measure anyway - the fact that they don't call on their competitors lessens the impact of awareness. They did it before with the Dreamcast, where they pretty much flat-out ignored it, which led to the mainstream forgetting it was even there in the light of the PS2.

SCiARA 5 Oct 2006 12:40
7/7
so your saying Sony have never moaned in the past about being copied?
Posting of new comments is now locked for this page.