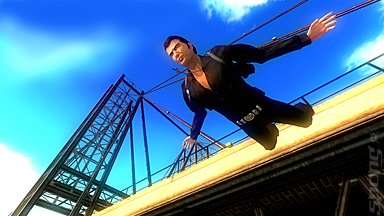 Just Cause
Despite a significant drop in sales, Lego Star Wars II: The Original Trilogy holds firm at number one in the ChartTrack All Formats Chart this week. The force is strong in this one - buy it you will!

Eidos skydives straight into the chart at number two with Just Cause, which also takes number one in both the Xbox and Xbox 360 charts. SPOnG's reviewers are currently poring over this title, so watch this space for an in-depth look at Just Cause in the very near future.

Finally, the Xbox 360 and PSP versions of EA?s mafia sim The Godfather push that title back up into the top ten at nine, which means that six of the top ten games this week are now available on Xbox 360. That's great news for Microsoft as they get ready to unleash their Xmas assault at X06 in Barcelona tomorrow.
Companies: Codemasters Eidos Electronic Arts LucasArts
Games: Just Cause LMA Manager 2007 Tiger Woods PGA Tour 07