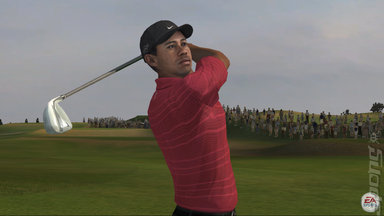 All Images (4) »
'I'm a TIGER!' is what we imagine Tiger Woods doesn't say to himself in a mirror, after a rather good round of his new videogame, Tiger Woods PGA Tour 07, released by Electronic Arts next week.

SPOnG, along with a load of other media chancers, competition winners and rent-a-celebs from the telly (Vernon Kay, Ian Wright, Jodie Kidd, the usual...) will be gathering at a 'yet-to-be-announced' central London venue this coming Monday (25th September) to meet and greet Tiger himself, and watch the master show us all how to play golf, both the real and the simulated versions, courtesy of EA.

The press release for the event informs us that: "three par 3 holes from famous courses around the world have been recreated and players will test their skills by teeing off on Tiger Woods PGA TOUR 07 before placing their ball on the green and putting against the world?s number one golfer."

SPOnG is hoping that all the time we've put in at Queen's Park Pitch and Putt in recent years should finally pay dividends.

Should you not fall into one of the above-named categories and thus not be able to attend, then never fear, as you will be able to watch coverage of the event on Channel 4?s T4 in the very near future whilst nursing a Sunday morning hangover and lusting over the girls from Hollyoaks.