Hardly any shock there then. First stunning screens inside. 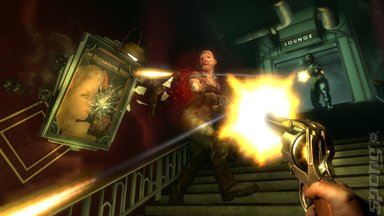 All Images (2) »
UPDATE: These screens are from the 360 version of the game and not the PS3 version as originally reported on SPOnG and numerous other sites, which has not yet been announced. It was announced at X06 last week that Bioshock is to be a Spring 07 Exclusive for Windows and 360, so we'll bring you further news on any future PS3 version as soon as we get it.


Irrational's BioShock is up there in our most wanted next-gen titles. As we mentioned in news earlier this month it's been known for some time that the game would be making its way to PS3 in 2007, in addition to already confirmed versions on PC and Xbox 360.

So it is with the minimum of surprise that we just received the first PS3 screens of BioShock, which, we think you will agree, look simply delicious. We've put calls in to publisher Take 2 today regarding BioShock, and we aim to bring you a more detailed and updated preview on the title very soon. Hopefully we will also be able to see a little more at Microsoft's X06 shindig in sunny Barcelona next week.

For more information on this luscious next-gen beauty, read the latest BioShock preview to see what it is everybody's getting so excited about.

PS3's lineup is starting to look like me too.

comments? Anyone?? Or am I missing something?

This game and a host of others are a prime example of how Wii can take 2nd place in the coming gen, if not 1st, since so many AAA games are going to be cross platform (360 and PS3) why would you even think of getting both. Not to mention the fact of pricing. We live in the two gaming system era.

I can see a very high percentage of gamers having a 360 with the Wii or a PS3 and a Wii.... few will get PS3 and 360 and a very small amout will have all three. I for one will get the Wii at launch and then get the PS3 when the price is right. Bioshock, Metal Gear and other are eye candy and should bring great gameplay.

Visuals look stunning, so let's hope the gameplay is as good...

Better start saving for that next gen console, or upgrade the PC...

Sony is so fuxored.

Sorry, I'll translate. The new screenshots look worse than the previously released ones. Sony is in for some trouble. Is that better?

Sorry, I'll translate. The new screenshots look worse than the previously released ones. Sony is in for some trouble. Is that better?

why didn't you just say that in the first place!! ;)

Sony is so fuxored.
Oh you must be so proud now that it's been confirmed that we were all taken for a ride and the screenshots are from the Xbox 360 version!

I suppose it's now Microsoft that are fuxored?

Sony is so fuxored.
Oh you must be so proud now that it's been confirmed that we were all taken for a ride and the screenshots are from the Xbox 360 version!

I suppose it's now Microsoft that are fuxored?

Given that you are expected to pay roughly twice as much for the Sony console (as the Xbox) that will only be pumping out a fraction of its potential for the first year or two and all cross platform titles are going to be developed with compatibility in mind and therefore look pretty much the same, I would say that everyone who invests in Sony's new baby is likely to feel fuxored. ;)