Use The Force, Mook 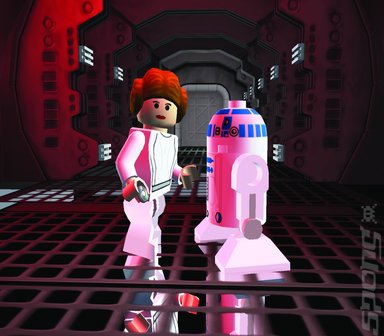 All Images (7) »
The Traveller's Tales-developed gem that is Lego Star Wars II climbs up from last week's number three to this week's number one. The game is the tenth Star Wars title to feature at number one in the history of the All Formats Chart and the PS2 version has also managed to rack up the second highest sales week of any other LucasArts game, other than Star Wars 3 ? Revenge of the Sith. That title of course, had the little helping hand of the massively hyped movie to help shift units, although to be fair, the recent DVD release of the original trilogy can't have hampered sales of Lego Star Wars II. Indeed, the Star Wars effect has also helped the original Lego Star Wars (on Platinum re-release) re-enter the top ten, creeping back in at number nine this week.

If you have yet to play the game then we urge you to download the demo and take a look. For more details you might also want to check out our fully detailed Lego Star Wars II review.

Capcom's Xbox 360 exclusive Dead Rising, last week's chart-topper, staggers one place down the chart to number two this week. Still very much worth a look for those who enjoy mowing down hordes of zombies with a lawnmower, plus also being able to run around shopping malls and nicking loads of free stuff. Read the SPOnG review of Dead Rising for more detail on that one.

Two other 360 exclusives remain in the top five this week, although both THQ's Saints Row and Atari's Test Drive Unlimited fall one place each down to numbers three and five, respectively.

The Brain Training phenomenon - for that is what it is - continues unabated. Renewed advertising has boosted sales of Dr Kawashima's Brain Training, which hops back up the chart this week from number ten up to number six. Those who told Nintendo that they would not replicate the Japanese phenomenon can now eat their hats please. It seems that this nifty little Touch! Generations title is proving that true word-of-mouth marketing works.

SPOnG looks forward to seeing what innovative Touch! Generations titles Nintendo plans to roll out on Wii in 2007 and, especially, how they will work in conjunction with your DS. Expect more news on Wii-DS functionality in the coming weeks, as we patiently await the Wii's December 8th launch in the UK.

In the handheld arena, the superb Tekken: Dark Resurrection is highest new entry this week, straight in at number 12 in the All Formats chart and claiming number one in the PSP chart. Sega's Yakuza straight in at number 20 - watch this space for our review later this week. Further down the chart, it's a disappointing first week for Ace Combat Zero: The Belkan War, with the PS2 arcade flight sim managing only number 31. Worse news for Revolutions' Broken Sword: The Angel of Death. The THQ published intrepid adventure creaping in at 33.

Next week, join us to see how the releases of Godfather (360 and PSP), LMA Manager 2007 (PC, 360 and PS2) and Tiger Woods PGA Tour 2007 (every last-gen platform still breathing electrons) fare at the hands of the paying customers across the UK.