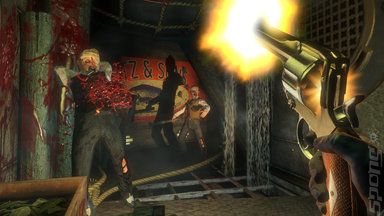 All Images (2) »
BioShock, you may recall, was one of SPOnG's most-wanted games that we managed to get to see at this year's E3. You can read our full, detailed preview of BioShock along with the first impressions of the game we got from chatting to the developers from Irrational games.

The game is billed as the 'spiritual successor' to Irrational?s PC hit System Shock 2 from way back in 1999, and is currently (officially) only being developed for PC and Xbox 360. We know this because our Take 2 sources will not (officially) tell us anything about any PS3 version that may or may not be currently in development.

However, it's an open secret that a PlayStation 3 version of the game is bound to appear at some point in 2007, but we will of course be bringing you the official confirmation and news on that when we get it from Take 2. In the meantime, Take 2 has just sent us these two gorgeous looking BioShock screens, which remind us how good the game looked when we saw it back in May.
Companies: Irrational Games Take 2
Games: Bioshock