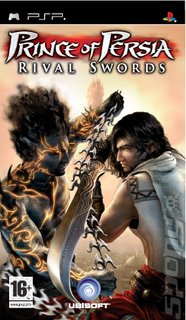 Ubisoft has just sent us the press announcement for the next PSP iteration of their popular and critically-acclaimed Prince of Persia series. You can see the pack image from the title, Prince of Persia: Rival Swords, right here.

The game is due to ship for this coming Christmas in Europe and in early 2007 in North America. Hah! So take that America. Whilst you guys are playing on your over-priced PS3 supercomputers this next Yule, us Europeans will at least have the option of playing the new hand-held Prince of Persia game, which will also be properly and competitively priced no doubt.

OK, so we're bitter because some Yankie eBay joker is undoubtedly going to rip us off in November now, purely because we can't wait till March to get our PAL PS3 for free from Sony. But, despite the sarcasm, we are genuinely happy about a new Prince of Persia game for PSP, as we rather liked last year's PSP offering, Prince of Persia Revelations.

Rival Swords is being developed by Pipeworks Software, part of Foundation 9 - the same bunch that did such a sterling job on last year's Revelations.

Ubisoft has the following to tell us about the game: "In Prince of Persia Rival Swords, the Prince makes his way home to Babylon, bearing with him Kaileena, the enigmatic Empress of Time, and unspeakable scars from the Island of Time. But instead of the peace he longs for, he finds his kingdom ravaged by war and Kaileena the target of a brutal plot. When she is kidnapped, the Prince tracks her to the palace -- only to see her murdered by a powerful enemy. Her death unleashes the Sands of Time, which strike the Prince and threaten to destroy everything he holds dear. Cast out on the streets, hunted as a fugitive, the Prince soon discovers that the Sands have tainted him, too. They have given rise to a deadly Dark Prince, whose spirit gradually possesses him."

So basically Rival Swords is going to be a slightly expanded version of the (rather good/ way above average) console game Prince of Persia: The Two Thrones just as last year's Revelations was similarly based upon Prince of Persia: Warrior Within.

Full game review to follow as soon as we manage to get hold of it. We'll be contacting Ubisoft later today to try to organise a stealth mission preview visit at some point over the next month.