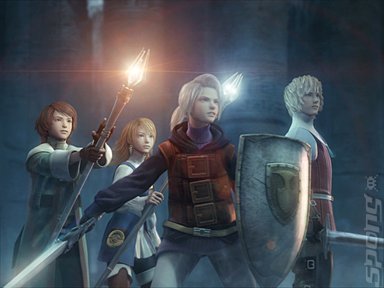 All Images (3) »
Here at SPOnG, we love the Japanese. We try to be like them, and so should you. As we're sure you know, in Japan everybody starts the day with an impressive, acrobatic kendo workout, before powersliding down a mountain in a turbo-charged car to meet sexy twins in sailor outfits and sing karaoke over some sushi.

The other thing they love to do over there at the moment is buy Nintendo DS games by the bucket-load. More DS Lites were sold in Japan last week than all the other consoles put together. Even more impressively, the all formats software chart has been totally dominated by DS titles, with every single game in the top ten for Nintendo's facelifted double screen of delight.

Here's a full run-down, with new title Final Fantasy III slam dunking in at number one and shifting a staggering 500,000 copies:

tyrion 1 Sep 2006 07:50
3/4
What also needs to be pointed out is the exact level of pwnage that the DS Lite enjoys in Japan as regards hardware sales.

And by "everything else combined" what I mean is Game Boy Advance, Game Boy Advance SP, Game Boy Micro, GameCube, Nintendo DS (phat), PlayStation 2, PSP, Xbox and Xbox 360. Those are the other hardware platforms that Media Create tracks the sales of.

In fact, if you want a laugh at Microsoft's expense, the DS Lite sold more hardware units last week than Microsoft has managed to sell, Xbox and 360, since the DS phat launched 91 weeks ago! And the DS Lite does this almost every week.