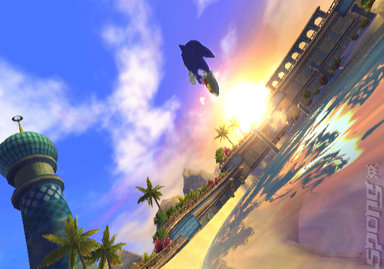 All Images (7) »
Sonic?s first outing on Nintendo?s Wii, previously known as Sonic Wild Fire, has now been given a shiny new name ? Sonic and the Secret Rings.

SEGA?s just sent us word of this, along with the company?s mighty triple-A line-up for Leipzig next week, which is as follows:

Sonic and Monkey Ball on Wii and the PS3 titles - Virtua Tennis 3, SEGA Rally, Sonic The Hedgehog and Full Auto 2 - will all be playable, but only behind the hallowed closed doors, where SPOnG will be spotted grabbing all the posh nibbles from the cute Japanese girls and hogging Banana Blitz on the sole Wii dev kit, much to the chagrin of our peers.

Back to Sonic on Wii, and SPOnG spoke to Prof. Svend Joscelyne, our resident Professor of Sonic Culture and History to quiz him about what the title might refer to.

?The original story of Sonic and the Secret Rings was said to be about Sonic finding missing pages of a book, so whether these secret rings are the key to these pages, or whether SEGA has changed the plot entirely, is a bit of a mystery,? the good Prof. mused.

SEGA UK PR chap Stefan McGarry informed us that the Rings title was all to do with tying in with the overall Arabian Nights theme and world in the game, with all the previous Sonics having been set in Mobius.

Our resident Prof was slightly more dubious as to the history of Sonic and Mobius, informing us that: ?This really all depends who you speak to, since Sonic Adventure all games have been set on 'Earth'. On Megadrive, the Japanese games were also set on 'Earth', but the Western games were changed in story to alter the planet to 'Mobius'. There's one theory/school of thought which suggests that the planet was changed due to a blip in a Yuji Naka interview for Sonic 2 MD, but those arcane discussions are probably not really of interest in this context.?

Erm, okay Prof, we?ll leave you to debate that with your Sonic grad students another time. If anyone has any more arcane Sonic folklore to regale us with, then please do it in the forums right below these words.
Companies: SEGA
People: Professor Svend Joscelyne Stefan McGarry
Games: Sonic and the Secret Rings

if joystiq is to be believed the psp is gettign that. I personaly hoep its incorect as i dont own a psp but it would be a nice addition to the systems somehwat lackluster library.

Svend Joscelyne 17 Aug 2006 13:35
3/5
LUPOS wrote:
if joystiq is to be believed the psp is gettign that.
I wouldn't hold your breath. The Dreamcast was supposed to be getting a SoR 4 but it was canned. No doubt there's a chance development'll have started up again, but I wouldn't count on them finishing it. At least not soon. XP

as long as lan di lives, i am incomplete

well they have a few dif developers working on projects at the moment so i tend to think it will get done. Sadly however it will probably more like the rather disapoinitng shinobi then the super awsomeness that was ninja gaiden.