Plus, more on the rip-roaring successes of Marketplace and Live Arcade. 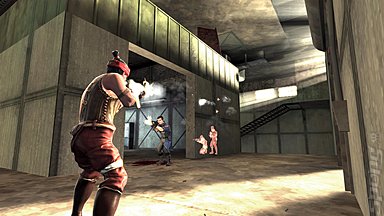 All Images (9) »
Microsoft has been pretty quiet on the Live Anywhere front since they unveiled the concept back at E3, as we told you about way back in May. That was until today, with information coming out of their Gamefest 2006 event outlining more the Live Anywhere masterplan/dream/fantasy (fanboys, delete as applicable).

The Vista-run Shadowrun is to be the first PC title to use Live Anywhere functionality ? which means that PC and 360 users of the game will be able to play the games online. Cross-platform.

What?s really impressive about Live Anywhere - at least in theory so far - is that the core functionality that you currently get on Xbox Live will also appear on Live Anywhere, so both 360 and PC gamers will be able to access Friend?s Lists and Gamercards on one network. Obviously, PC users will navigate Live Anywhere using their keyboard and mouse.

What the PC Live Anywhere won't feature, at least to start with, is Marketplace. This is surely only a matter of time, however. Microsoft has still to decide on various business models for how this type of service will work.

The company also made mention of various anti-piracy measures for Vista and Live Anywhere, due later in 2007. More detailed news on Live Anywhere plans as we get them.

Microsoft were perhaps more excited about telling attendees all about how much of a success Xbox 360 and Xbox Live Marketplace have already been in their short-lived lives to date.

Here?s the figures they merrily rolled out. Xbox Live Marketplace users have, to date, made 46 million downloads. Over 80% of Xbox Live members download content from Marketplace and more than 65% of connected consoles have downloaded Xbox Live Arcade titles (with over eight million Xbox Live Arcade downloads since the launch of the retro gamer?s dream service).

The most popular XBLA games to date are Geometry Wars, Uno, Bankshot Billiards 2, Marble Blast Ultra and Street Fighter II Hyper Fighting. SPOnG has tried to get download stats for these and other XBLA titles, but so far Microsoft are, for whatever reasons, not issuing these.

It's very impressive stuff. Now let?s see how Sony and Nintendo fare as both companies make their first (serious) moves into the online space this coming autumn/fall. Sony is still to unveil the bulk of its PS3 online plans, which we will hopefully get more of from Leipzig next week.

And with the breaking news that Nintendo intends to make online gaming with Wii subscription-free, there?s sure to be millions more eager hardcore and casual gamers playing online this time next year.

One thing is for sure: the future looks bright. Millions more people playing hundreds of better next/new gen games this time next year can only put a smile on SPOnG?s usually downtrodden, miserable face.

Oh, one last thing. Scramble's up on XBLA today, the latest in the ever-improving XBLA Wednesday release frenzy. Go and download it immediately. It's still good, we've just been giving it a whirl!
Companies: Microsoft
Games: Scramble Shadowrun