Too Human. Too Wrong. Too Bad 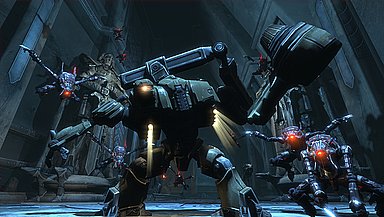 All Images (5) »
All the 'big boy' websites moved yesterday to dive on the coattails of a smaller site that seemed to all the world to be packing a major scoop. Because, as you will have read, Silicon Knights had dropped the Unreal Engine 3. The news cropped up on, we believe, smaller site AdvanceNM who ran with a piece reading:

CONFIRMED: Sources reveal to AMN that the first in Silicon Knight?s epic Too Human trilogy will not use the Unreal Engine 3. More inside.

Sources tell AMN Xbox 360 that Silicon Knights ? the developer behind Eternal Darkness: Sanity?s Requiem and Metal Gear Solid: The Twin Snakes ? is ditching the Unreal Engine 3 for its upcoming Xbox 360-exclusive title, Too Human, in favor of coding its own engine, on account that the Unreal Engine does not work well with the Xbox 360 hardware.

This was followed up by the might Ziff Davis' magazine exit-plan 1Up:

1UP News has been able to independently confirm the rumor with its own sources, however, indicating Silicon Knights actually is developing their own engine for Too Human. This change could easily result in a lengthy delay for the long-in-development game (part one of a planned trilogy), a move already hinted at by sneaky release date shifts Microsoft previously refused comment on.

It was all a great big fat weird funny lie.

"Although we do not usually comment on speculation, rumors of Silicon Knights completely scrapping the Unreal Engine 3 on Too Human and massive delays for the Too Human product release are false," said Denis Dyack, president of Too Human developer Silicon Knights via Microsoft to often-boring-usually-correct-GameSpot. "Too Human is progressing very well and we expect that gamers will be extremely excited with Too Human when we next show it."

The context of the communication was, according to the site, "strongly denying that Too Human was ditching the Unreal Engine or that it was in development limbo."