Another actual must-have for Nintendo's portable 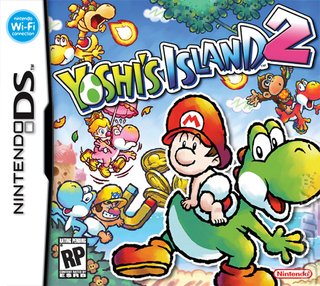 It's becoming a bit of a joke. As frustration escalates amongst PSP owners at the dire lack of killer-app offerings a very different kind of frustration is consuming DS owners. How can they afford to buy the endless stream of amazing games Nintendo's first-party studios are churning out.

The latest must-have being Yoshi's Island 2, sequel to the stunning 1995 Super Famicom original which was re-birthed perfectly on Nintendo's GBA a decade later and is now being updated on the DS. It was already a prime target, being as it is arguably as close to Super Mario World 3 we're going to see. But there's more. How about Baby Wario and the Internet...?

The box art for the North America release of the game has just trickled out, showing a glimpse of what we might expect. Best news is the Nintendo Wi-Fi symbol in the top corner of the packaging. Can you say 'free endless online gaming'? Sounds good doesn't it? Tetris, Mario Kart, Metroid, Animal Crossing and now the sequel to one of the greatest 2D platform titles ever.

More gushing sees a sublime cast. Baby Nintendo all-stars including Mario, Bowser, Peach, Wario and Donkey Kong, all sat astride yellow, pink, red, blue and green Yoshi's. A good way to tell you haven't been taken over by mind-controlling robots is to stand up now and look in the mirror. See that tear? That's proof you're still human and the world can sometimes be just good.

I'll Eat Your Soul 14 Aug 2006 11:54
1/1
I'd be interested to know in what capacity DK, Bowser and Wario appear - are they playable characters on specific levels in the same way Bowser was in Paper Mario GC? Or are they the bad guys? Or do they only crop up in multiplayer modes?
Posting of new comments is now locked for this page.