Wright spills on Spore and more. 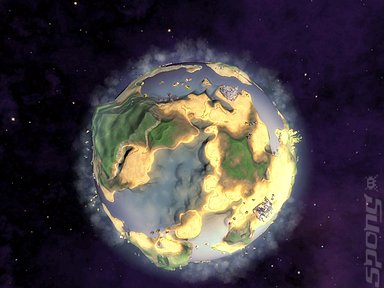 All Images (4) »
SPOnG caught up with Will Wright recently for a quick catch up on what is probably one of the most hyped games on the planet right now - Spore.

Will told us again all about his inspirations for Spore; the ageing educational documentary movie The Powers of Ten (which SPOnG urges you to download and watch if you have still to see it); the SETI programme (Search for Extra-Terrestrial Intelligence) and ‘astrobiology’.

Wright defines astrobiology as the science of, “Looking at the probability and form of life in the universe. It’s a subject which involves all these other subjects, like physics and chemistry, astronomy and sociology. It’s interesting because all of those different sub-fields end up mapping to different scales, like the Powers of Ten. So you have very small things at the molecular or cellular level, and very big things at the stellar or galactic level.”

Wright’s brain, as you would imagine, seems to operate on a slightly higher level than most.

Coming back down to earth, Will also told us of his love for Guitar Hero and his DS. He's clearly a man after our own collective heart: “Guitar Hero is cool. That’s a brilliant game. I’ve been playing with my DS a lot. I’ve got a DS Lite and I just love that machine. The DS is great because it’s Nintendo’s prototype for its big idea about creating new game experiences….When I first saw the DS, I thought: 'What a goofy idea'. Then they came out with the DS Lite, which looks quite nice, and the software was actually pretty cool. People are actually using both screens and the stylus in cool ways, and every game seems kind of different. It feels like unique, interesting gameplay.”

Svend Joscelyne 10 Aug 2006 15:18
2/5
It wasn't really a 'damn their oily hides', more of a 'we didn't do anything wrong' kind of attitude. Since that message appears to have been successfully communicated, I guess SPOnG didn't see a reason to keep it online anymore.

But who are we to speculate? Better to just comment on the interview - and a cracking one at that. If certain questions were given to IGN and others to publish, they obviously got the crap ones... I read their edit and the two page 'interview' was practically trying to get Wright to confirm console status. Which, of course, by the time they tried asking, he was probably straddled to the floor by EA PR execs.

dr_faulk 10 Aug 2006 15:33
3/5
Svend Joscelyne wrote:
...their edit and the two page 'interview' was practically trying to get Wright to confirm console status.

lol, so true. When I read it I thought to myself "Jeez, that's a sucky bunch of questions. Change the topic!"

brainofedsan 11 Aug 2006 11:00
4/5
Interesting that the article was pulled before an EA/Yank backlash began. No pressure fom anyone then?????