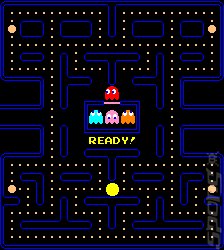 Wahey! It?s Wednesday. Formerly the worst day of the week, as there really is no way you can build it into the weekend just gone, or the one that?s still way off on the horizon. Now of course, Wednesday is our new favourite day of the week thanks to the kind-hearted people of Microsoft (yeah, right! ? Ed).

No really, this week sees the arrival of the game which, for many (greying) gamers of a certain age kicked off their obsession back in the early eighties. Yes, that?s right, Pac-Man arrives on Xbox Live Arcade today, following last week?s classic Street Fighter II Hyper Fighting and topping off the recent XBLA Wednesdays campaign.

So now we can finally try to top each other?s Pac-Man high scores on XBLA?s worldwide leaderboards. This, if nothing else, should pretty much convince you of the genius of Live Arcade.

If you will allow us one misty-eyed moment of nostalgia, it?s like that moment in the dingy back room of the local pub near where we grew up, cadging ten pence pieces off our dads to feed what was the beginning of a wonderful lifetime addiction to videogames. Except now it?s right at home, on our telly, with thousands of friends worldwide to show off our high scores to. Pure magic.

Everybody gets Pac-Man, even those fools who misguidedly claim to have never played a computer game. Put them in front of Pac-Man, and they too suddenly want to beat their last high score.

While Microsoft is still to confirm what goodies we have in store over the coming months - an official statement is imminent - SPOnG can tell you that the next biggie to look forward to is going to be Lumines Live on September 6.
Companies: Microsoft Namco Bandai
Games: Pac-Man

king skins 9 Aug 2006 16:27
1/1
I'm quite looking forward to lumies. I haven't played the PSP version but i have it on my phone and its pretty cool.
Posting of new comments is now locked for this page.