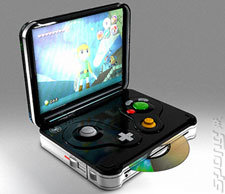 Artist's Impression of a Portable GameCube
All Images (2) »
And for once, it looks like it's all true. Breaking news in the US, all of which was pulled after being made public earlier today, posits definite launch dates, price and further launch details on Nintendo's Wii, without doubt the most secretive emerging console in videogaming's short history.

Price has been set at $229, somewhat higher than many had hoped and a price no doubt inflated by Nintendo on the back of Sony's $600 PlayStation 3 demand. A cynical, if totally expected, move from Nintendo which we predict will be turning a profit on every hardware unit from day one on sale.

Two launch dates (territory unspecified) were offered - November 2 and November 12. It appears third-parties are working to two different sets of Nintendo-issued guidelines. At time of going to press, we have no idea which is the most recently issued.

Two colour options will be available day one, black and white. Other colours will follow during phase two of launch, probably after four months of general Wii release.

According to IGN, an outlet that had published the mass leak only to pull it, presumably at Nintendo's request: "Nintendo has allegedly bumped production of Wii hardware to 5.5 million units by the end of the year, a significant upgrade to previous numbers. The jump is purportedly based on the positive reaction to Wii from press and industry analysts at E3 2006.

The same report also stated that: "IBM may be working on a revised Broadway chip with a lower clock speed for a future Nintendo hand-held -- presumably one that plays GameCube discs." SPOnG has had a handle on Nintendo's push towards a portable GameCube player for well over a year now. We are more than pleased such a device is seemingly nearing an official announcement.

UPDATE: Several outlets have claimed that the source story was never pulled from IGN and that SPOnG misrepresented the facts by claiming such. This is incorrect. At the time of publishing this story the IGN article was no longer available. However, a redacted version was later published by IGN, omitting the passage mentioning the portable GameCube. 1UP covers the situation with before and after image of the IGN article.
Companies: Nintendo

God you people are slow :p. Everyone had that when Shigsy dropped the line "those GC-disks would make a nice medium for a handheld no?" (or something of the sort) about ...2-3 years ago...

Credit stealing mongrols! And 5.5 million Wii's at the end of the year...jowzers, they will have chased up MS by a half in a mere months time.

Ditto 8 Aug 2006 09:37
3/18
OptimusP wrote:
"SPOnG has had a handle on Nintendo's push towards a portable GameCube player for well over a year now"

Yeah, Spong thought it was the Gameboy Micro if I remember correctly...

Optimus wrote:
God you people are slow :p. Everyone had that when Shigsy dropped the line "those GC-disks would make a nice medium for a handheld no?" (or something of the sort) about ...2-3 years ago...

There's difference between a hint and a handle

what puzzles me though is (if its true) - what is nintendo's game is with that portable gamecube player?

would anyone develop original content for it? are they trying to compete directly with the psp? maybe it would be detrimental to the nintendo ds for nintendo to release another handheld alongside the ds?

if its a practical device, ie. good battery life and not too big, id get it to play gc games on the move. but it still seems odd to me, dunno if its a good idea for nintendo

(that's the original story before it was pulled)

The new CPU would be an upgrade of the 750 GX line, called 750 CL, but i didn't find any info on that CPU... maybe you guys can dig into your sources?

God you people are slow :p. Everyone had that when Shigsy dropped the line "those GC-disks would make a nice medium for a handheld no?" (or something of the sort) about ...2-3 years ago...

Credit stealing mongrols! And 5.5 million Wii's at the end of the year...jowzers, they will have chased up MS by a half in a mere months time.

I agree, I have been waiting for the announcement. It was revealed when the original Game Boy Advanced came out, that they were working on a future game boy using game cube disks, and based on the gamecube (or was that part a little after).

The question I want to know is, if the WII spec rumoured last month, really the Gamecube Advance spec, as I have been thinking since these low specs have being coming out over the year. Also that the Wee, will it really be using something similar to the older more powerful rumoured spec (1-2Ghz processor etc). I think, what ever comes out, they need to be competitive with the DX10 part in the xbox 360.

So, Sony Ps3 and Portable Gamecube for me?

By the way, your artist, forgot a keyboard to make it into a laptop. ;

Some years ago the release of 3D holographic memory was near, and I thought that Nintendo was possibly going cartridge with the Nintendo 64 because they might be planning on tapping into it. The expected consumer bonanza didn't come through of course, still great technology and great capacity, but they could not make it cheap enough etc for consumer use. But now there is something else that can plug straight into the Wii.

Yes a 100GByte SD card based on IBM's Millipede technology due within a year (and this is starting capacity, not peak). Those recent arguments over hard drives in consoles I read, might be irrelevant, as it could make hard drives an expensive irrelevance in consoles. But of course, this may not come through, maybe it will be delayed, be introduced too expensive, or be simply to expensive to make, but the potential capacity is there to do something like this for a dollar and sell it for $30.

A doubt that IBM would want to release such a card at such a cheap price, unless you were a Japanese OEM, but think if it was that cheap, it could be cartridges all over again ;).

Direct x 10 is coming out with windows vista, which isnt going to be out till some time first half next year, and even the xbox 360 does not take advantage of all the new dx10 features.

How in the crap could nintendo possibly try to release something that rivals a new graphics api that is at least 2-3 years away? DX9 has been around since dec 2002 and all we have seen are revisions since.

Besides nintendo does not use the MS api, they use OpenGL which is independant of DX (even if they are similar and push each others developments).

For all you people that dont get it...if you are graphic whores then dont buy a nintendo Wii. Waste your money on Sony's "super duper computer" or a viable x360. If you want some new and fun ways to game and care more about he product and less about the shiny presentation then buy a Wii. Nintendo is not going to magically come out and present a souped up wii that is graphically superior than what even x360 is capable of.

I think he was trying to say "if Nintendo had a GPU and graphics API [that rivaled that in the PS3 and Xbox360]". It's a bit technically incorrect though. Sorry way.

tg0006 8 Aug 2006 23:43
11/18
this thread is wrongly worded, im a frequent ign reader and all of this is word for word of what ign had posted, and its all worded as if it was official on spongs article, even if the title is wii launch gossip, it doesnt say that enough in the actual article.

Fabulous things, quote marks. They can really help show that "word for word" (see, I did it there) text is in actual fact a respectable reference, and not passing off as its own editorial.

Any reason why you missed that? Was it perhaps something to do with you not actually reading SPOnG's article at all? :P

tyrion 9 Aug 2006 07:40
13/18
tg0006 wrote:
this thread is wrongly worded, im a frequent ign reader and all of this is word for word of what ign had posted
Pity that frequent reading has not trained you to read past the headline or maybe the first paragraph.

TFA wrote:
According to IGN, an outlet that had published the mass leak only to pull it, presumably at Nintendo's request
That seems, really, to me, to say "We found this on IGN, the pulled it, so we posted it".

That might be why it's "word for word" what IGN posted.

config 9 Aug 2006 10:06
14/18
tg0006 wrote:
this thread is wrongly worded, im a frequent ign reader and all of this is word for word of what ign had posted, and its all worded as if it was official on spongs article, even if the title is wii launch gossip, it doesnt say that enough in the actual article.
This reader is wrongly configured. As a frequent IGN reader, he has had his clue removed.

CRS117, it is a personal opinion of what I would like before I drop buying a PS3 and buy a Wee WII instead. And I am referring to the hardware features of the Direct X after the next Direct X, which were revealed a few years back. It is perfectly possible to present an alternative scheme comparable. It doesn't have to be as full blown as the R600, but the extra functionality gives extra processing capability. I shouldn't say all the Direct X 11 features, but the ones best for processing. By balancing off features they can maximise processing potential for design size.

The Power VR people have announced DirectX 10 features a year or two ago (doesn't mean that it is being used in current releases though) and that is what Intel is using in the 965 chipset.

Has, Nintendo released a official spec yet, I haven't kept up on it? The specs I have seen range widely, I would not be surprised if the setup is within half the power of the others (and that's all they need). With the way graphics and physicist are done, you still need some processing power to maintain a minimum acceptable level. The little, almost gamecube 1.5 like, spec released recently does not seem to be sufficient (unless they have some super processing power below it) unless you want to emphasise cutesy Wii control games and retro games. I would hope they release something at least within shouting distance of the competition that enables good representation of all games.

Nintendo's new controllers are based on old ideas remixed, even I was planning controllers like this. Do not be totally fooled by marketing with "cute girls" on them, maybe they will want to play.

Have a good day mate.