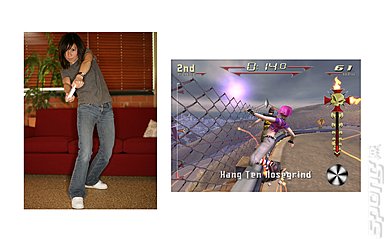 All Images (4) »
Tony Hawk?s Downhill Jam will be power-grinding onto a Wii (or a DS) near you later this year.

The game is being developed exclusively for Nintendo?s new gen home console and your shiny new DS Lite handheld (or if, like SPOnG, your girlfriend?s half-inched that, your clunky and scratched old silver one).

There have been rumblings on various game websites and forums that the look of the game is not really up to much, when compared with the shiny next gen HD graphics of the forthcoming 360 and PS3 'Tony Hawk's Project 8' game (working title) - although this is kind of like comparing the looks of a shiny new Ferrari Testarossa with a classic Mini Cooper ? the first one is loads more powerful and sexy, though it doesn?t make the latter any less fun.

Another altogether less savoury analogy from a SPOnG staffer (who will remain unnamed) is that it's like the difference between watching the vaseline-lensed Playboy channel and making love to your hand while perusing a copy of Club International at close range.

Err, anyways, you get the gist! To see how Tony Hawk's Downhill Jam will work with the Wii?s motion-sensing controller check out the video over on YouTube.

zoydwheeler 7 Aug 2006 17:37
2/2
1080 for Wii is surely only a matter of time. I personally preferred the N64 version over the GC version, but to have a version which makes full use of multiple WiiMotes is really going to be a joy.

I fully advise playing split-screen 1080 on a projector, which was one of my greatest pleasures in life, until someone MADE me give my projector away to them with clever Jedi mind tricks.