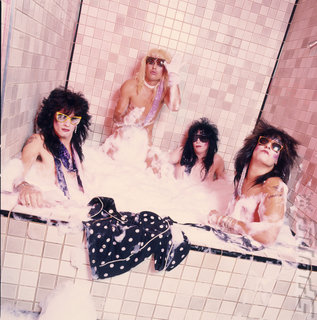 All Images (5) »
RedOctane has announced three new metal-tastic tracks which will be appearing in the forthcoming sequel to Guitar Hero, one of our favourite games of the year.

Guitar Hero II promises more of the same - just better, louder and more glammed up. The three new tracks just announced, which you will no doubt want to go and dig out from your CD collection in order to practise your axe-moves on, are as follows:

Yes! Thatĺs right, Motley Crue! You can rock out with Tommy Lee and the rest of metalĺs original bad boys this Christmas.

Well, at least you can should you live in the US, or can manage to get hold of a copy of the game on NTSC import, as it looks like the European release of Guitar Hero II will be sometime around early 2007.

The complete tracklist for the game to date is as follows:

SPOnG will also be trying to get word from RedOctane on those persistent 'Guitar Hero II coming to Xbox 360' rumours which have been doing the rounds. Watch this space.

In the meantime, any requests? Just let us know in the forum below, and weĺll be sure to pass them onto the guys at RedOctane the next time we catch up with them.
Companies: Red Octane
Games: Guitar Hero