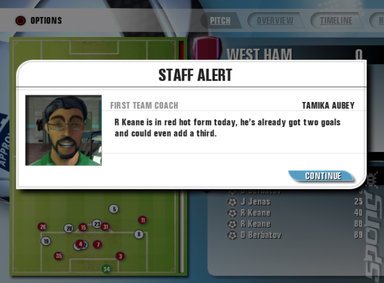 All Images (6) »
Forget about the nonsensical World Cup affair, with its head-butts, red cards and man-tears, it’s time to get back to some real football.

SPOnG’s just come off the blower with Andy Gray - no, not the pompous football pundit, the PR fella for ZOO Digital up in sunny Sheffield in the People’s Republic of South Yorkshire - who’s been telling us all about the new version of Premier Manager 2006/07, out August 18 on PS2 and PC.

And, as if by some kind of Twilight Zone-style magic, Codemasters has also just sent us the announcement release on LMA Manager 2007, detailing the next version of their footy management title and entitled ‘Football never came home because it never left’. SPOnG likes what you’ve done there, Codies’ PR fellas, it’s not often that a press release header brings a smile to our jaded lips.

Yes, that’s right. It’s pretty much more-or-less almost August (well, nearly) which means its time for the onslaught of information about football videogames – both of the management variety and of the arcade kind. So how can a relatively small-time player such as Zoo compete with the big boys, we asked Andy, their PR guy?

“Well, we’re not trying to compete, what we’re offering is something quite different. Premier Manager will appeal much more to casual players and those types of players who just want to maybe spend an hour or a few hours playing a fun management game.”

“What Champ Manager and Football Manager do, and do very well, is to provide an incredible, in-depth experience, but some players either don’t want that or simply don’t have the time to put in with those games… these are the types of players we hope Premier Manager appeals more to,” he added.

ZOO’s Premier Manager 2006-2007 is the twelfth iteration in the multi-million selling Premier Manager series, promising a ‘massive overhaul from last year…much improved navigation and an updated player database to result in an enhanced gamer experience’.

Codies’ LMA Manager 2007 follows hot on its heels, releasing in September on Xbox 360, PC and PS2, and will offer one of the most in-depth footy management experiences for console gamers available.