Sorry Orange, but XBLA Wednesdays are the future. 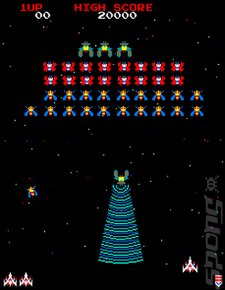 Yes, you read that right. Old School Arcade legend Galaga is being released today on the mighty Xbox Live Arcade service. This, the latest in Microsoft?s XBLA Wednesday?s big releases, has certainly brightened up an otherwise relatively quiet week in terms of releases.

For those perhaps not old enough to remember, Galaga was originally released in its arcade form in 1981 as the follow up to Galaxian, and was a significant improvement on that earlier landmark game, introducing an array of new features including its innovative fighter combination system, enemy tractor beams, more elaborate alien attack diving patterns, and ?bonus? rounds.

?Meh! So what?? thinks the 10 to 15 year-old demographic weaned on Halo 2. ?It?s just another one of those boring retro games, innit??

All SPOnG can say is, if you haven?t been lucky enough to have discovered a battered old Galaga in a dusty seaside arcade emporium near you recently, then download the taster of the game on XBLA to either remind yourself, or to discover for the first time, what pure arcade gameplay is like. You know, before we all become obsessed with polygons and draw distances and stuff.

In other XBLA news, the service?s worldwide games portfolio manager Ross Erickson spilled some interesting beans to the guys over on Joystiq earlier this week, telling them: "I'm glad [Xbox Live Arcade] Wednesdays have kicked off. Barring unforeseen development issues from the developers themselves - our issue was to fill the pipeline with a lot of titles on the upfront because of the inevitable schedule delays we'll have - we'll still have enough queued up in our certification process we'll always be able to have something coming out once a week."

Woo-hoo! Wednesday, previously the worst day of the week, as it was neither possible to build it into either weekend that sandwiched it, is now the new best day of the week for fans of quality arcade action.

This week Galaga, next week Street Fighter II: Hyper Action (Capcom), the week after that, Pac-Man. That should be enough to be going on with for now. And with Sonic the Hedgehog, Alien Hominid and plenty of other classics from Microsoft?s XBLA partners (including Namco, Capcom, Midway and more) the future of the service looks bright.

At least that is, until Sony and Nintendo unveil their own world domination plans for online distribution of games for PS3 (Sony PooS?) and Wii (with the awesome Virtual Console).

Until that time comes, lets just be happy and celebrate what we?ve actually got in the here and now. Each XBLA game will set you back 400 or 800 Microsoft points (which in normal money means Ł3.40/Ł6.80) and all have free demos so you can give them a quick whirl to see if you want to part with your hard-earned.