Impress the locals and film your homies. 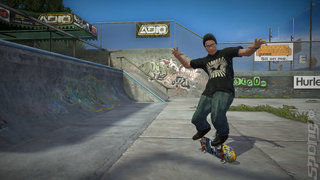 All Images (5) »
If you are anything like us, then you will no doubt be almost cacking your pants in anticipation of playing Tony Hawk?s Project 8 on PSP, PS2, PS3, Xbox or Xbox 360 (phew!) when it finally skates into town this coming autumn/winter.

Of course, we hope that they do something with that execrable name, which is surely only a temporary tag for the next-gen Hawk outing.

Check these new screens on the game, which, as well as looking hotter than a pair of original 1970?s Vans, will also feature completely new gameplay elements such as film and photo goals, an enhanced physics system and an ?impress the locals? feature.

You will also doubtless want to download the new extended gameplay trailer right here to get a better taster of what?s in store.


Check SPOnG?s dedicated THP8 page for the full lowdown on the game and all the latest screens and assets.
Companies: Activision Neversoft
Games: Tony Hawk's Project 8