Return of Our Favourite Kiwi Bird in Trainers 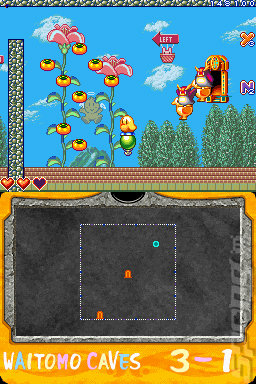 All Images (3) »
SPOnG confirmed the rumours which were flying around the Internet earlier this month ? yes New Zealand Story Revolution is in development for DS.

And, as our pals over at Rising Star Games assured us just a few weeks back, they would furnish us with details and first pics as soon as was humanly and electronically possible. Which they, to their utmost credit, have now done.

So, check the first screens on this new update of a true 1980?s old school classic right here. And whilst the guys in SPOnG?s Amiga Club go all dewy eyed over there in the corner (first rule about Amiga Club... don?t talk about Amiga Club), the younger DS aficionados on the team, who are too young to even remember the original arcade game, are being assured that they are in for a treat this coming Christmas.

So, what has Rising Star done to update this classic platformer? We are assured that the game will be an ?accurate re-telling of the timeless 1988 original.?

You will again play as gutsy Tiki the Kiwi (a bird, not a New Zealander!), and are charged with rescuing your kidnapped friends from the clutches of a nefarious leopard seal.

Rising Star goes on to inform us that ?The setting for each of the game?s levels will remain untouched although the layouts will be remixed and re-jigged to provide fresh challenges. Graphically, the game will benefit from an overhaul that updates New Zealand Story?s visuals whilst retaining the clean lines of its arcade ancestor.?

Martin Defries, Rising Star?s bossman, said of the title ?With New Zealand Story Revolution, we?re not going to be taking away anything that made the original such a charming classic. Its delicate balance will be carefully recreated and with the new features we?ve included, New Zealand Story Revolution will be an even more manic platform adventure than the original.?

So far it?s penciled in for a ?late 2006? release, so we?ll make sure to bring you more news and information on what we hope is going to be a must-have DS title for Christmas, as soon as we get it.

Let us know in the forums if you are as excited as we are about being able to revisit this timeless classic. And check out SPOnG's dedicated New Zealand Story Revolution page for regular asset updates as we near the game's release later this year.

apart from Kick Off 2, obviously!

NiktheGreek 19 Jul 2006 12:00
3/4
"... the layouts will be remixed and re-jigged to provide fresh challenges." "Its delicate balance will be carefully recreated and with the new features we?ve included, New Zealand Story Revolution will be an even more manic platform adventure than the original."

I was pretty disappointed by Bubble Bobble Revolution and Rainbow Islands Revolution, so I'm not holding my breath. Still, I can't help but think that a nicely-done New Zealand Story would be a perfect addition to my DS collection. I just hope that it lives up to the press release's promises.

SorelissLarethian 19 Jul 2006 21:16
4/4
Destroy my childhood memories and I swear honest to god you're friggin toast; the whole friggin lot of ya!!!!!!
Posting of new comments is now locked for this page.