No, not the car race, the game devs award. 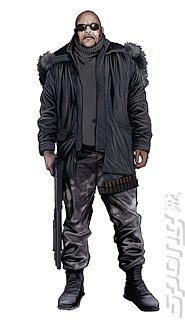 All Images (3) »
SPOnG likes Bizarre Creations. A lot. The guys behind Project Gotham Racing 3, Geometry Wars 2 and forthcoming Sega title The Club (one of our picks of E3 - see pics to the right of this news) have some serious games-developing brains and skills between them. Not bad for a bunch of Scousers.

So while their mates were growing up in the normal Scouser way ? learning how to hotwire cars, sell dodgy pills in clubs and knock out snidey Lacoste T-shirts from the back of a van ? these boys were learning how to play and eventually make quality videogame experiences.

(Ed ? just to be clear here, all references to Scousers and Scallies in this news story are the opinion of the writers and in no way representative of SPOnG as a whole).

Back to the point. SPOnG likes Bizarre Creations, so we are glad to report that the boys scooped up the Grand Prix prize at the annual Develop awards in Brighton last night.

Indeed, it was a jubilant mood all round in the rather glam Hilton Metropole Hotel last night, with over 400 leading devs from across Europe in attendance to honour their peers, getting sloshed and playing on the beach at midnight. Rumour had it that Team17?s Martyn Brown - he of Worms fame - was last seen skinny-dipping under the broken West Pier. (UPDATE: Not really!)

Other winners on the night included Sony, who walked away with three awards; Ubisoft for King Kong (best use of a licence); and Criterion (Burnout, Black) who won the best art and sound award and the award for in-house development.

Stuart Dinsey, managing director of Intent Media, said: "The games development community is perhaps one of the world's great unsung creative industries. The Develop Industry Excellence Awards marks the time of year when the people who are at the creative coal-face of the business are recognised for just how remarkable they are."

With no further ado, here are the winners in full:

BEST USE OF A LICENCE
KING KONG (UBISOFT)