Then the Envizions Evo is for you! 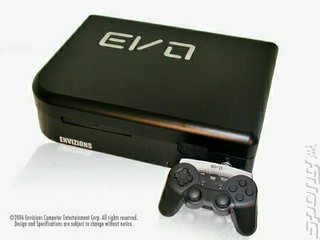 Picture = 1,000 words
Priced at a mere $679.99, the freshly-announced Envizions Evo enters the home console market on July 12, as a pre-order ready to sit on the Ikea black laminated chipboard entertainment centres in the homes of approximately 23 ill-advised technophiles, every single one of which will cry themselves to sleep until they save enough to buy the PlayStation 3 with a game and a second controller they were too impatient to wait for.

The Evo offers hard drive recordings of live TV and claims to offer 1,600 games on an on-demand basis. However, aside from scattered titles from Eidos and Sierra and a few other companies with supercharged licensing departments, the vast majority of the Evo title roster reads like a bad mobile phone download service: Pirate Poppers, Tino's Fruit Stand, Poker Pop, Don't Get Angry! 2, Zulu Gems etc...

The tech specs offered for the Evo read as follows:

Which isn't really that bad, but isn't really that good. Given some of the desktop PC deals around at the moment though, and the added functionality they afford, the Evo does face something of an uphill struggle. It also faces the problem of being undeniably ugly.

Trick your friends by telling them they can pre-order the latest and greatest thing in home entertainment here. Unless it's an elaborate joke...

Jun|'06
Phantom Console. Not a Lie. Official
Jun|'04
Infinium’s Kevin Bachus Accused of Lying to US Courts
May|'04
Phantom Materialises
May|'04
Infinium Labs lets the dogs see the rabbit

Joel Beardshaw 13 Jul 2006 09:54
1/5
Those horribly JPG'd images on their site really instil trust in their abilities. But really, you?d have thought they could capture good images of their own product in action.

king skins 13 Jul 2006 10:45
2/5
Aren't they just selling this as an enhanced Media Center PC rather than a console?
more comments below our sponsor's message

Jay 13 Jul 2006 12:28
3/5
Joel Beardshaw wrote:
Those horribly JPG'd images on their site really instil trust in their abilities. But really, you’d have thought they could capture good images of their own product in action.

Never mind the image compression, what about the boz-eyed chick on the home page?

horngreen 13 Jul 2006 12:48
4/5
I'm just glad they were able to nab the rights to Tinos Fuit Stand. I played Tinos Produce Market back in the 90s and it was sweet. Tinos Hotdog Vendor was quite a letdown I must say although the puzzles involving mustard/relish were very addictive!