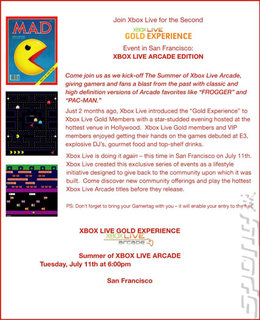 Microsoft looks set to answer critics of its content flow over Xbox Live Arcade, with an announcement that it will be readying a new game every week over summer, with a slew of new titles expected to follow, one released on Wednesday of every week.

Not quite an entire summer's worth of games, but as mentioned, it's likely that the sheer number of games licensed by Microsoft will see the releases continue at some pace.

As you'll be aware, SPOnG revealed this swelling of content way back in April of this year, when a Microsoft exec exclusively revealed a major upswing in retro arcade content was at hand: "You've heard of MAME right? Right. We're just doing a legal version of MAME, meaning that all the game owners get paid and the users get quality product based around a community. Imagine the biggest arcade in the world, just 1,000 times bigger. It'll have as many machines as we can possibly get, all with score-rankings and other community stuff. It's not a secret that MAME was massive for hackers of the original Xbox and the pull and sales of retro game packs on current machines is still really high. If this is taken and put under the right noses, it should become the biggest thing in mainstream/hardcore gamer crossover in the industry." You can read the full piece here.

The official press release on the matter released at a launch party for the new games held in San Fransisco reads in full:

Xbox 360 Heats up the Summer with Xbox Live Arcade Wednesdays: First Up, Frogger and the Arrival of the Best Old School Games of All Time

Kicking off with 'Frogger', fans of the Konami classic can download the game that first hit arcades in 1981 and once again be able to dodge traffic and eat flies with their frog, this time racking up Achievements along the way. There's no better way to celebrate the 25th anniversary of Frogger and the launch of Xbox Live Arcade Wednesdays than downloading this latest title from the Xbox Live Arcade game portfolio.

Xbox Live Arcade's Frogger has been enhanced and reinvigorated for the Xbox 360 and features new, enhanced artwork that matches and complements the original style. In addition, the game's audio, including sound effects and music ditties, has been modernised to sound crisp and clear on today's high performance sound systems. New features include:

The release of 'Frogger' will be followed by a host of highly anticipated titles:

Of course, a line-up of retro classics wouldn't be complete without perhaps the most classic title of them all - Pac-Man, the fruit-eating maze game that changed the face of gaming upon its release in 1980. The Xbox Live Arcade version, which comes out on August 9, takes the famous franchise to the next-generation. With multiplayer over Xbox Live and tons of cool Achievements, Pac-Man stays true to the original while powering-up to next-gen standards.

To help kick-off the summer of Xbox Live Arcade and the launch of these classic game titles, Xbox Live celebrated the 80s with the second Xbox Live Gold Experience event last night in San Francisco for its community members and is now helping other Xbox gamers do the same. Xbox 360 gamers that are interested in throwing their own 80s game night can visit www.xbox.com to secure a retro party-in-a-box complete with Microsoft Points Cards good for free arcade title downloads, pizza coupons courtesy of Papa John's, and a gift card for 80s music.

"There's no better way to revisit the 80s than to throw a retro-themed Gold Experience party - complete with the right classic arcade games, music, and pizza," said Ami Blaire, Global Marketing Director for Xbox Live. "So this summer, live it up on your Xbox 360 and enjoy our new twists on the old classic faves."

All Xbox Live Arcade games can be demoed for free on Xbox Live Marketplace. Check out Xbox Live and Xbox.com for continuing updates on exciting new content available to Xbox 360 gamers.

No mention was made regarding pricing for the games.
Companies: Microsoft
Games: Frogger Galaga Pac-Man Super Street Fighter II