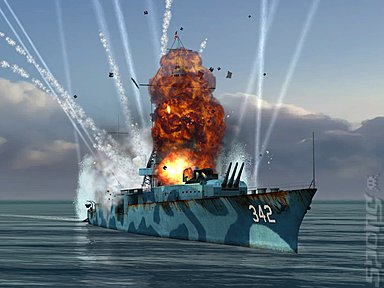 All Images (3) »
The Sunday Times' business section reported yesterday that SCi is currently being investigated by police in Hungary, of all places, with allegations being made against the Britsoft giant by Hungarian developers, MGE and Mithis, contracted to produce Battlestations: Midway.

The allegations centre on a complaint that SCi allegedly broke into offices and stole the source code for the game.

An SCI spokesperson is quoted in The Sunday Times as saying: "In November 2005 the developer (MGE) failed to deliver on its contractual obligations so we exercised our normal contractual right to take over the development of the software, which we have successfully done."

However, this is clearly not how the issue is viewed by MGE and Mithis, with the firms' lawyer, Dr Versitz Piroska, telling the paper: "A number of complaints have been filed with the Budapest police with regard to the illegal removal of software and hardware connected to the Battlestation: Midway Joint Task Force and other games . . . (the complaints relate to) unlawful penetration into Mithis's computers, copying, sabotage and deletion of games' data and infringement of IP rights."

So, both parties seem to think they own the IP rights and it seems as if a dirty, no-holds bars legal battle has just kicked off. Watch this space for a news update in the coming days.