And Mr Biffo sticks his oar in too. 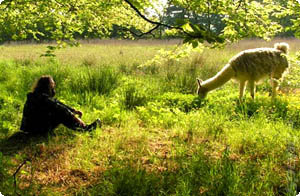 Whilst you have to respect any man (apart from Wacko Jacko) who keeps Llamas, makes mind-bogglingly strange games and defiantly chooses to live out in rural West Wales, you also have to agree that Jeff Minter is well...to put it mildly, a bit strange.

The man who created Hover Bovver for the C64 (click for info) back in 1983 is perhaps best well known for Llamasoft and more recently for the Xbox360 interactive visualiser which he calls ?The first step into a future filled with beauty, light, creativity and fun?. Being in his brain must be ace!

It seems that Minter really has fallen for the 360 dream, judging by his latest comments in his new, regular Edge magazine sound-off. Speaking about ambling into his local Carmarthen branch of GAME whilst enjoying a nice Cornish pasty, and being baffled at not wanting to put his name down on the PS3 pre-order list, Minter has a few harsh words to say about Sony.

Firstly, on the lack of a new Wipeout for the PS3 launch: ?Sony could probably have completely had me if there was lovely, sweet HD footage of a new Wipeout for PS3 at E3 ? I?ve made sweet, animal love to each iteration of that series over a succession of Sony consoles, and the thought of spending my Christmas in a comfortably enhanced frame of mind zooming around eye-poppingly beautiful HD circuits at insane speeds with some banging choons on would have had my name at the top of the preorder list in no time.?

Minter continues: "They seem absolutely certain that even when they say that it's going to be considerably more expensive than existing consoles, and that maybe there won't be that many titles actually available at launch, nonetheless us eager customers will rush out in droves to buy it because, hey, it's a new PlayStation."

"Yeah, you've got the lion's share of the current market, but don't get smug, Sony. Nobody likes smug, and it's not an attitude that has served companies well in the videogames industry."

Then, to really stick the knife in, he has a pop at the PSP: "Just making the shiniest, most expensive hardware doesn't cut it these days. Sure, the PSP was beautiful, shining, pretty and posh, whereas the DS was definitely the ugly sister. But hey, the ugly sister is better in the sack." This, it should be made clear, comes from a man that has animals as his best friends, plus helped design the Atari Jaguar.

Elsewhere in Edge, the Sony-bashing continues unabated, with Mr Biffo sticking his funny old oar in. Here's Biffo on Sony: "When the games were unveiled at E3 it was obvious the console falls far short of the sort of power Sony has been hyping. It was a bit like the disparity between Spinal Tap's vision of a towering tryptych and the on-stage reality."

I thought it was saying he'd jumped on the Sony bandwagon! The guy's definitely on the mad side of sanity, but he's never given into commercialisation, so I was wondering what could have changed his mind.

Turns out there was nothing to worry about, nice to see someone in the industry speak their mind openly.

config 7 Jul 2006 16:05
2/12
YenRug wrote:
The guy's definitely on the mad side of sanity, but he's never given into commercialisation
Damn right! Yak steadfastly backs loser formats*;

Even his last mainstream project, Unity, was on the "loser" format of the current-gen, the Gamecube ... and that project got canned.

I love the guy as in industry veteran/legend/enigma, but he sure knows how to back the wrong horse.

* of course, now he's working on XBL Arcade stuff - how's that for selling out?

warbaby 7 Jul 2006 17:08
3/12
Good to see that not everyone is blindly following Sony this time around, even if that someone happens to be fried out of his mind.

YenRug 8 Jul 2006 20:20
5/12
There's probably loads out there with some very detailed info on him; helps if you spell his name right when you search, btw. Some basics, in the 80's he wrote several computer games, usually featuring llamas and other animals as the protagonists, eventually establishing his company Llamasoft. He's done the odd game over the years, but his current focus is on what he calls "light-synths", co-ordinated/synchronised light and music systems; I believe he has one installed in the Xbox 360, when you play a CD/music track it displays a light show which you can control with the pad.

vault 13 9 Jul 2006 16:06
6/12
Wow yeah, he helped make a visualizer so stoners had something to actually stare at. Big whoop. And Hover Bovver, I owned it (well pirated it), it was fun yes. But it was no revolutionary game or anything. Just a classic reflex move/mow/dodge animal game.

Also to note, the 360 had a craptastic launch too. If Sony's launch fails to impress and they miss numbers, which is 99.9% ensured, and if any chooses to bitch about it and not mention the 360 in the same sentence as a reference of how not to do things on a launch, I will personally kill every one of you..., and also create more nonsense run-on sentences.

Just to already knock a system before it comes out and not mention Microsoft's pathetic launch (well two including the sorry original X-Box launch) is biased, stupid, one-sided,and well fanboyish! I mean it such an amateur play to come out and say that I'm going to against the tide and bas Sony's new creation. It's not edgy, it's not new, and it's not intelligent. Unless our fine niews reporters left all the intelligent and insightful stuff out, Jeff Minter is an idiot, classic lawn mowing simulator or not.

fluffstardx 10 Jul 2006 11:20
8/12
He is right, though. Sony have come out, said the next generation starts when THEY say, that they stole no ideas, that people will just have to save up to afford it and will buy it anyway, and shown us very little that really shows off how ridiculously powerful they claim it is. It's nice to see people like Jeff and Biffo step up and call a spade a spade.

Jeff does have a habit of jumping on bad systems, yes - but he sticks by his decisions. The lines are being drawn right now, as the war really gears up to start, and you have to expect this sort of thing.

hollywooda 10 Jul 2006 11:49
9/12
hear hear, it's not about being a "Fan boy" it's about not being bullied, I've bought PS1/2 & PSP & have enjoyed them both but their new aggressive approach to mass market herding, is beginning to make me feel really fcuked off.
I'LL decide if i want Blue ray to be my future choice of format, I'LL decide if i want to bin my PC & have the Sony master computer PS3, I, dont think i should pay extra money NOW, for something that COULD potential be worth it's money in 2 years!???..... who are Sony to gamble with my money.

tyrion 10 Jul 2006 12:17
10/12
hollywooda wrote:
I'LL decide if i want Blue ray to be my future choice of format, I'LL decide if i want to bin my PC & have the Sony master computer PS3, I, dont think i should pay extra money NOW, for something that COULD potential be worth it's money in 2 years!???
So exercise your consumer right (the one you actually still have) and don't buy the f**king thing!

It's not as if crack Sony Ninja squads are going to install a PS3 overnight and issue you with a bill. There is nobody forcing you to buy a PS3.

If a product doesn't meet your requirements, be they price, aesthetics or support then don't pay money for something that is useless to you.

If you don't approve of the business tactics, associations or attitude of a company then don't give them your money.

Just don't come onto the Internet and whine about how expensive your next games console will be when there are alternatives out there. Buy a Wii, buy a 360, wait for a price drop, wait for more games, wait for a signed apology from Ken himself if you must, but stop making out like you are the victim in all of this.

This isn't just aimed at you, hollywooda, it's aimed at the thousands of whining pricks on the Internet who are disappointed that the PS3 costs so much. They want all the features and none of the cost. Nobody would be complaining about the inclusion of a Blu-ray drive or the Cell processor if the price was Ł250-300.

Look at it this way, both Sony and Nintendo have taken a risk this generation. Sony with high cost electronics and Nintendo with a new control scheme. Microsoft have played it safe with an Xbox V2. Who has made the right choice? Who knows? All I know is that the winners in all of this are us, the games players, who have a choice for once.

hollywooda 10 Jul 2006 13:28
11/12
I know what your saying but this is a games forum?, where people talking about games consoles?, if everybody (pricks) are Whining about it, then it's something a lot of people feel strongly about.
It's not the price, the gamble or hardware or next gen
wars, it's sony's attitude.

tyrion 10 Jul 2006 17:12
12/12
hollywooda wrote:
I know what your saying but this is a games forum?, where people talking about games consoles?, if everybody (pricks) are Whining about it, then it's something a lot of people feel strongly about.
I feel strongly about the fact I can't afford a Ferrari or an Aston Martin, but you don't see me running around car forums repeatedly saying how I think the price should be lower or how I don't want Aston to tell me if I want sat-nav or not.

hollywooda wrote:
It's not the price, the gamble or hardware or next gen wars, it's sony's attitude.
Yet that list of things is what you were griping about in the first place.

If the price of the PS3 was lower than that of the 360 and Sony said exactly the same things, people would be agreeing with them.

The fact is this, a lot of vocal people don't want to pay Ł425 or $600 for a PS3 and have taken the hump because they don't see themselves getting one at launch.

I come back to my point, nobody is forcing you to get a PS3. Just because you want a product that has been priced higher than you are comfortable paying for it does not give you the right to accuse Sony of "gambling with your money".

Sony is gambling, but with its own money and its own market share.
Posting of new comments is now locked for this page.