Destroy All Hippies Game ? Shots and Info Inside

Latest on Destroy all Humans! 2. 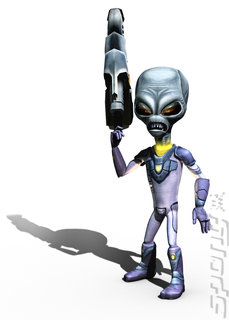 All Images (6) »
Destroy All Humans! whipped an age-old videogame genre convention on its head. Since back in the early days of Space Invaders, we have been well trained in defending the earth against various types of alien attackers. But when it came to playing the evil, human-destroying aliens, this game was something of a first.

So we had to doff our cap to THQ for its originality and innovation in putting out such a novel (and hugely enjoyable) game that doesn?t involve fat men wrestling in Speedos or internationally-famous children?s cartoon licenses.

We also have to thank THQ for sending us this latest batch of screens on the forthcoming Destroy All Humans! 2, which, as you can see here, is set in the swinging sixties - you remember, that glorious time our parents go on and on and on about when the world was largely at peace, before everything turned to sh*t. Yes, SPOnG hates the swinging sixties, and all that it has come to stand for, so the opportunity to return there as an alien to destroy a load of daft hippies only fills us with a sense of glee!

THQ?s press release sums up the game thus: ?Crypto returns to take on the world of free love, the Cold War and other 60?s era clichés, causing destruction around the globe with an upgraded arsenal of alien weaponry and enhanced mental abilities - battling a variety of enemies from secret agents and giant creatures, to Soviet Forces and ninja warriors.?

For more on Destroy All Humans! 2, have a look at SPOnG's dedicated PS2 page and Xbox page.

Best Game Ever by a mile!!

Hey any chance this is going to be coming to the x360? I have not heard but i would love to pick it up on that system.