But the heat is on from Mario. 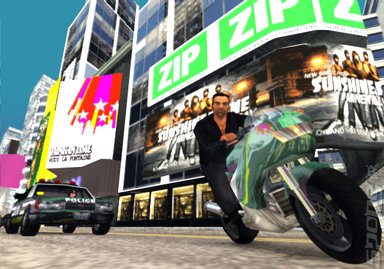 All Images (6) »
As the summer heat takes its toll on sales of home console software (with PS2 faring the worst last week) it?s a good week all round for Nintendo?s DS, what with the recent release of the DS Lite and last Friday's arrival of the accompanying must-have title for summer ?06, New Super Mario Bros.

Mario bounds straight into the All Formats Chart at number two this week, failing to knock Rockstar?s Grand Theft Auto: Liberty City Stories off the top. This is the second highest DS launch week ever, behind - yep you guessed it - Super Mario 64 DS. And who was it who said retro gaming was a niche hobby? You can read SPOnG's review of New Super Mario Bros. right here. Basically, if you don't have time to read the review, the game's awesome and you should buy it!

It's been a bad few days all round for football, what with England?s exit from the World Cup. Football is now so last season and accordingly, EA?s FIFA World Cup Germany 2006 drops one spot from two to three, Konami?s Pro Evolution Soccer 5 drops from four to five, Eidos Interactive?s Championship Manager 2006 drops from 15 to 16 and Codemaster?s retro-tastic Sensible Soccer 2006 falls from number nine to number 18.

Back to the top ten, and while football falls out of favour, being brainy is the new cool, with Nintendo?s Dr. Kawashima?s Brain Training still up there at number four this week, whilst Eidos Interactive?s Tomb Raider: Legend hangs in there at six, and Activision?s Over the Hedge climbs five spots to seven (yep, the film came out last week). Hitman: Blood Money from Eidos is down three places to number eight and Nintendogs: Dalmatian & Friends falls a couple of spots (ha!) to number nine, with Nintendo?s Animal Crossing: Wild World still paying a visit at number ten.

New entries? It?s July, so there's nothing much to shout about. Ubisoft?s Over G Fighters for 360 is straight in at 13 and THQ?s mythological RPG Titan Quest roars - well, whimpers more like - into the chart at number 25.

Check it out here

You're looking at the All Formats (Full Price) charts there.

We always comment on the All Formats (All Prices) chart, as does pretty much everyone else (unless they're a Nintendo fanboy site :)

Because GTA:LCS sells new at under 20 quid, it's classes as budget.