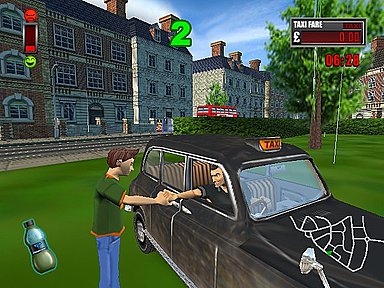 All Images (7) »
We are about to see the launch of London Taxi: Rush Hour, the ?official? game based on the iconic FX4 London Black Cab.

The game is set for a PS2 budget release (RRP Ł19.99) later this month, courtesy of publisher Metro 3D, so you can finally live out any dreams you may have had of becoming a proper London cabbie, without forking out thousands of pounds and wasting years of your life doing the boring ?Knowledge?.

The premise of the game is simple: you collect passengers and take them to famous London landmarks in a set time limit in order to get paid, and hopefully pick up a decent tip from the punters in the back of your cab.

SPOnG caught up with the game?s producer, Mark Gemmell, earlier on today to find out more about London Taxi: Rush Hour. Read on.

SPOnG: How is it similar to London Taxi riding?

Mark Gemmell: ?London is mapped out with an accurate road system, we have modelled all the major landmarks, so a local Londoner will have an immediate advantage dealing with navigation. To make it just that extra realistic, we have included plenty of slow double-deckers and traffic jams. Just like real London, quite frequently the weather changes. It goes dark, and the rain pours out the sky, occasionally we get lightning or even snow. You are there to make a living, so as with a real taxi finding and collecting fares is the main aim, but who you choose to pick up affects your gameplay. As with a real taxi, you want to avoid customers who look like they are about to vomit. Collecting a dear old granny, she will want a nice journey, and will tip you for an uneventful safe ride, while a student will tip higher if you give them a thrill ride, with skids and jumps. For a businessman, time is money and he will pay a big tip for a fast trip. The money system in the game offers rewards for either careful or fast driving - so you can choose a perfectionist or madcap approach and both will pay off if you're good enough and choose the right customers.?


SPOnG: How does it differ to London Taxi riding?

Mark Gemmell: ?Unsurprisingly, the game is infinitely more fun! You have free roaming in the city, you can bump vehicles out of your way, jump over junctions, and fire yourself forwards with rocket pick-ups. If you get really pushed for time, you are also able to drive along pavements and nip down alleyways - often an essential shortcut. There is even the possibility to take an extreme shortcut underground, through the tube, although you will have to watch out for oncoming trains as you bounce over the rails.?

Mark Gemmell: ?Like real London Taxis, we have a multicultural selection of cabbies, male or female Asians, Indians, even Cockneys, We didn?t get any racist cabbies, but Stacy (a well endowed lady) might be prejudiced against flat chested women!. There is also a New York flavour coming in from J.C. - an African American taxi driver with a yellow cab - the yanks get everywhere - but at least this one knows the basics - like the fact London isn't the capital of Wales.?


SPOnG What about drunken, potential vomit-hazard customers? Plus can you tell us a bit more about what some of the customers expect of you?

Mark Gemmell: ?The customer's personalities are reflected in how well they respond to knocks and bumps taken en route and how impatient they are to get to their destination. It may be necessary to bash through a wall of crates or sneak down an alleyway to get a businessman to work on time, but you're probably best not taking the old lady up a back passage - she's more concerned with avoiding a rough ride.Of course we have the usual suspects too - dumb American tourists that want to see Tower Bridge and dorky Student types that only ever want to get to a café and don't tip worth s**t.

The free roaming aspect of the game lets you try out stunts you may have thought of, but were far too sensible in a real world to try: doing Donuts outside Buckingham palace, trying to smash your way into the houses of Parliament or jump the wall across London Bridge, or is it just me that thinks of these!?

schnide 3 Jul 2006 20:44
1/3
Dear Spong - there are problems with your site. I couldn't read the part of this review where you and the developer discusses how blatantly they've waited a few years hoping everyone will have forgotten what Crazy Taxi is, put in some sh*t graphics and half-arsed representation of London and see if they can get away with it. Please fix this ASAP.

dranann 4 Jul 2006 08:38
2/3
LOL - yeah, OK, it's a Crazy Taxi rip-off. But that's not unusual. Simpsons Road Rage, anyone? Question is, is it going to be any good. I'm getting flashbacks to the Davilex "London Racer" game! Same developer maybe, or just conincidence?

I can't find a review of it anywhere on the net.