Company of Heroes - latest video inside. 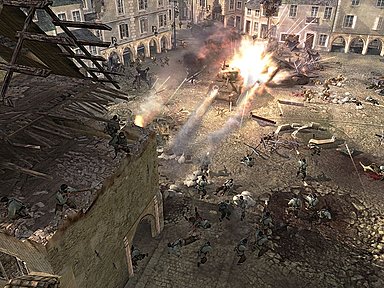 All Images (8) »
It?s all been a bit quiet on the Company of Heroes front of late. The game, in case you don?t remember, is the WWII Real-Time Strategy Game From THQ and Relic Entertainment which picked up the Game Critic?s Award for Best Strategy Game of E3 last year (year of our Lord, 2005) and is finally set for release on PC in September this year.

Company of Heroes promises to be something rather special, if for no other reason than it?s from Relic, the award-winning dev studio behind Homeworld, Impossible Creatures and Warhammer 40,000: Dawn of War. These guys live and dream in ?action strategy?.

?Yet another RTS set in World War II?? you may be thinking. So what sets Company of Heroes apart from the crowd? The game is built on Relic's next-generation Essence Engine which, they claim, delivers ?cinematic visual detail in a world completely driven by realistic physics.?

The fully destructible environments, the ?Advanced Squad AI?, the unrepeatable single player missions and the LAN/Internet multiplayer options are all fairly standard features which we now are familiar with. Indeed, it's what we expect from these types of RTS games. But this one really does look like it?s going to stand out from the WWII stragegy gaming crowd, due to Relic's pedigree and the number of critics awards it scooped at E3 last year.

Check out the latest trailer here: